I have just purchased a Westley Richards sliding block rifle manufactured in the early years of the 20th century. Chambering is .500 NE, which means that I can also use the versatile Nitro for Black loads in it (Ross Seyfried calls the .500 NfB "the .300 Win Mag of the Edwardian age").

The rifle's metal has been refinished and, although the barrel bears the trademark Westley Richards triangle right in front of the action, it has no manufacturer's name and address on top as so many vintage British rifles do. This--and its as-new bore--leads me to speculate that the barrel may have been replaced at some point during the rifle's lifetime. The rifle also bears the standard 1-standing, 2-folding leaf express sights.

As all rifles that I buy, I buy them to use. I'm no fan of safe queens. I got a great deal on this rifle too, which makes me want to use it even more and not worry all that much about resale value.

With my aging eyes, open sights are a challenge to use. I also think that so many other factors nudge me towards using scoped rifles--like for instance being able to pick a clear path for the bullet, not shooting through brush, etc. So here's my question to you gents of experience and good taste:

I'm thinking of having someone like NECG add a discrete way to scope the rifle--perhaps with a scout style telescopic sight in front of the receiver. But as I envision someone (no matter how good) taking a drill or soldering material to my vintage rifle, I can't help imagining the girthy, voluminous shadow of Bubba creeping into the picture.

Dilemma: scope and use/make memories with it, or leave as is and treat as a nice-to-have collector's piece? Is scoping such a rifle--in order to use it--a sort of Bubba-lite proposition? Am I overthinking this?

Well you could get claw mounts on it. It has a more traditional look. But I assure you men with more experience than me will be along soon to offer a more experienced opinion. Good luck

Tom, would it happen to be this rifle here...? 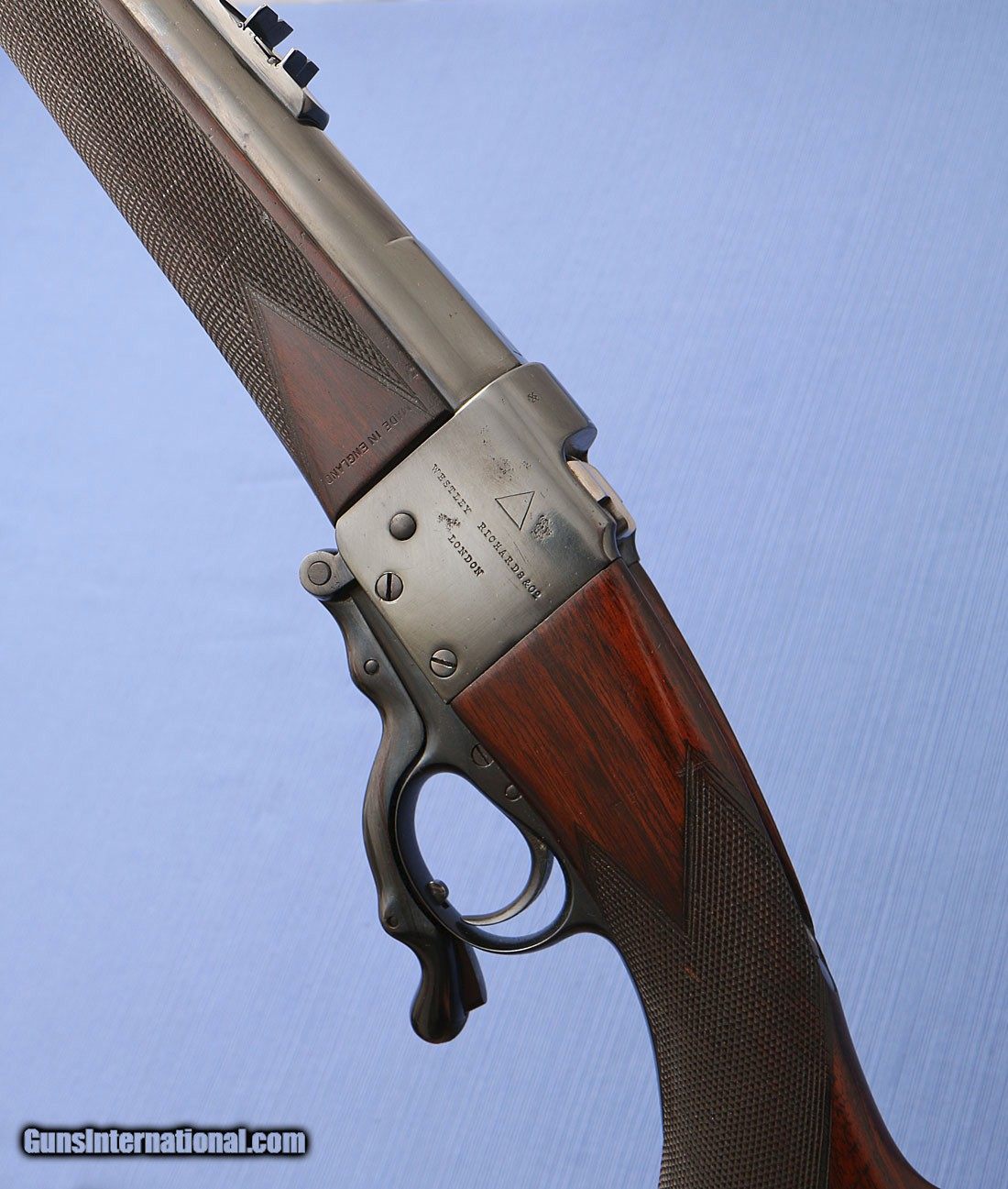 Yes, @WebleyGreene455 , it's exactly that one! @thriller the seller has taken down the pictures from Guns International, but if you click on WebleyGreene's link above, you'll see it.
W

Tom Leoni said:
Yes, @WebleyGreene455 , it's exactly that one! @thriller the seller has taken down the pictures from Guns International, but if you click on WebleyGreene's link above, you'll see it.
Click to expand...

Glad to hear you got it

Same basic sort of rifle as yours and it's got a pair of very simple, basic mounts dovetailed to the barrel. I imagine it took something like a Winchester A or B, if the scope was mounted at the time. You could consider doing something like that but using a more modern optic + rings, but that might be kinda tall and I'm not 100% sure about dovetailing the barrel. It'd be a period-accurate method and modern-made Shiloh Sharps rifles still get scopes fitted that way. Bubba can be avoided with the right gunsmith!

On the other hand, vintage-wise, a .500 Nitro doesn't seem the sort of rifle you'd find scoped at the time to begin with. They didn't really have the most robust optics to pair with a large-calibre rifle, or to pair with the weather of Africa or India, back then. Just my two cents but I think I'd leave it unscoped and enjoy it as much as possible as-is.

@WebleyGreene455 - That's a fine solution, and one that doesn't smack of Bubba at all. Once (and if) I decide "yes" to the scope question, there are a host of mounting systems that may work and still be elegant for a rifle like that. A pair of low-profile Talley bases may fit the bill, and then there's always claw mounts.

Then I'll probably find a discrete-looking vintage fixed power scope--somewhere I have an older Swarovski that I believe is a 7x (?). Or a low-power Lyman may also be nice.
X 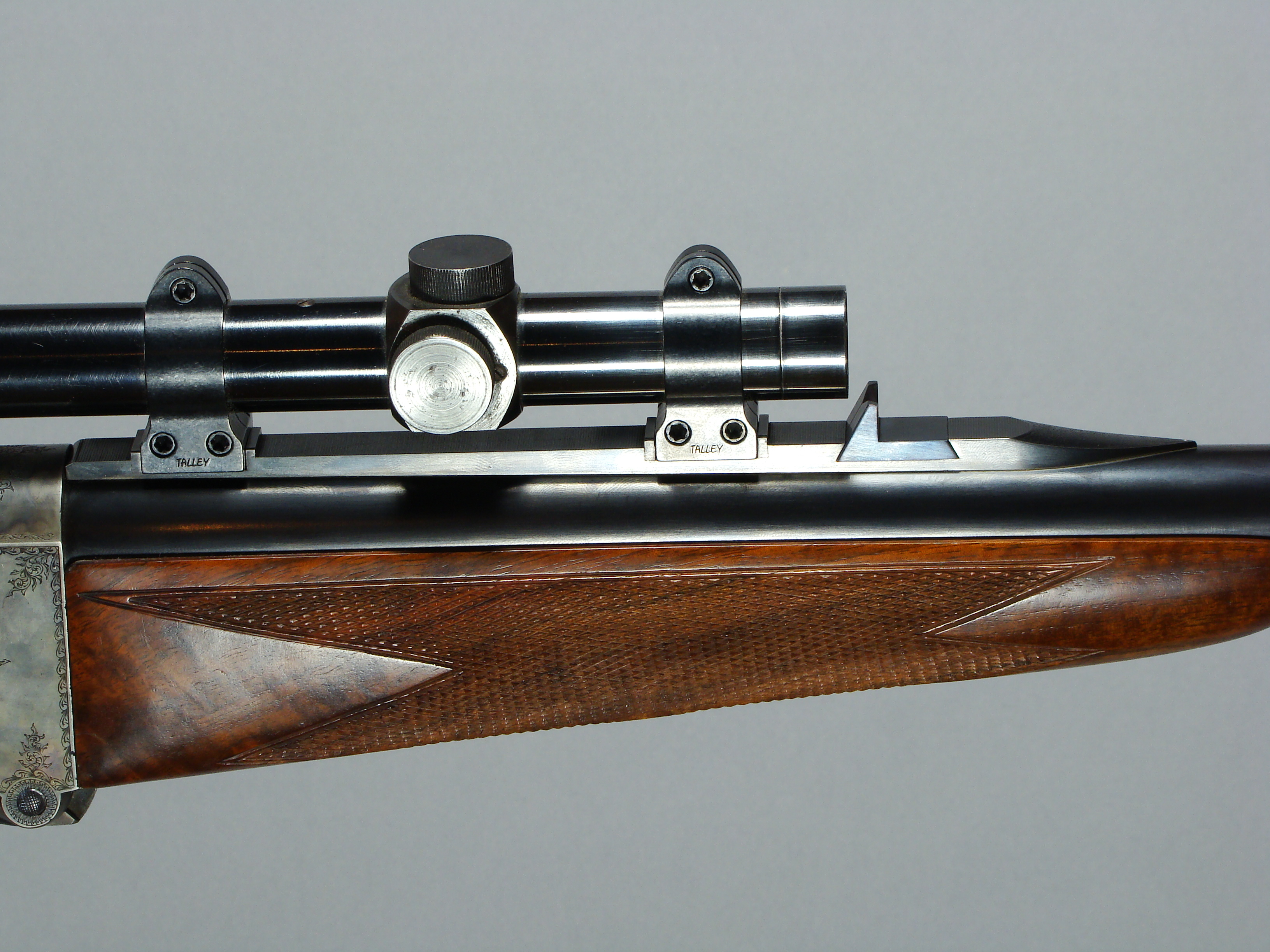 I’ve seen a similar rifle where the rear sight was drifted out and a custom mount made for a red dot sight mount was slid inand then a set screw held it in place. The red dot mounted on top of the mount.

Not the question you asked but … won’t hurt the originality of the rifle and will help older eyes.

NECG is a great shop, have you asked for their input yet?

Hello, @Denvir Tire - I have spoken to Mark a few times on other occasions, but I definitely plan on discussing this project with him. If I go ahead with this, it will be with NECG.
D

xausa that Farqie looks "right" with that set up.
X

I think so, too. Credit Steve Bertram. He has a way with such weapons and has the craftsmen at his disposal to add the finishing touches. You should have seen the rifle when I sent it to him. I found it languishing in a gun safe in a shop in Nairobi many, many years ago.
D

Yes, Steve does great work. I have a rifle that he re-struck and refinished the barrel on and it is flawless.
You must log in or register to reply here.

Iron sight or scope on rifle? opinions- PHs & those who have hunted Africa?