I just heard from Hodgdon's help group on suggested loads for the .404 Jeffery using A5744 for reduced loads and cast bullet loads...

Thought I would pass this data along to those who, like me, are trying to get up the learning curve.

Those numbers look about right. Loading and shooting cast bullets requires a thinking separate from jacketed bullet ballistics and performance. The 404 is a good design for lower pressure cast loading. At times cast bullets get a bad rap because some try to load them to jacketed bullet standards. I found it's best, with minimal surprises and disappointments, to keep them in the ball park of original black powder ballistics. I think in the 404 size case, a 300-400gr cast bullet at 1100-1300 fps is a reasonable objective that can yield excellent accuracy. If it were my project- I would slug the bore and use a 300-400 gr gas checked, grease groove cast bullet sized to between bore diameter and about .002" larger than bore diameter. To get a slug impression for key dimensions of the bore, use a slightly oversized, lubed pure lead ball or slug. Drive it through then measure across the outside "groove" ridges on the slug. That outside measurement will be the bore diameter. Use an alloy not too hard at about 10-12 BHN with a soft BP type lube like SPG. I'd load maybe 25-28 gr of 5744 topped with at about 2 gr or slightly more of low density Dacron... just enough to fill the space between the powder and the base of the bullet with a little bit of compression of the Dacron.

I never could better the accuracy and consistency of cast bullets in that type cartridge using a smokeless powder like 5744 (or any powder for that matter) by trying to exceed what a comparable black powder load would do. I know there is a lot written by internet cast bullet shooters claiming they can approach smokeless jacketed bullet ballistics. But I never could. Leading will result and accuracy will disappear. Trying to defeat the leading at higher, smokeless velocities and pressures by using a harder alloy usually doesn't work. If not satisfied with the BP ballistics in the 1100-1300 fps range, then it would be best to drop the cast bullet option all together and go with the standard 60% of max charge of H4895 under a jacketed bullet. That will yield velocities in the more familiar range of 1600-1800 fps or maybe even a little more.
Last edited: Mar 15, 2021
B

458,
not meaning to sound critical, but i think of both bore dia and groove dia, and in my thinking you are talking groove diameter.
bruce.

Good catch Bruce! Thanks. Slug and measure as described- the result will be the bore’s GROOVE diameter

The only tricky part of slugging a bore happens when the bore has odd number of grooves. That prevents an easy measurement straight across the opposing “groove” impressions on the slug. For odd numbered grooves, wrap a thin metal shim of something like pop can metal around slug so the metal forms a touching but non-distorted circle around the slug. Subtract two thicknesses of the metal from that measurement for groove diameter. An alternate method is to carefully spin slug between fingers and feel mic or caliper jaws just touch top of groove ridges on slug- that will be approx groove diameter. A third method involves using a specially dimensioned Vee block, but that is a procedure for measurements requiring the highest level of precision- not really required for this.

A good way to slug bore is use pure lead. Lube bore well. Pound or roll a soft bullet into a cylinder slightly larger than bore of rifle. Even a pure lead muzzleloader round ball slightly larger than bore works well. A one piece steel or brass rod works best to drive slug through bore. I start oversized slug into muzzle with a brass punch. Sometimes a ring is shaved off in this starting process but is of no consequence. Finish driving rest of way with the long rod.

All this may seem tedious or confusing but once done- very easy and takes very little time. IMO using a cast bullet of proper design, alloy and diameter is an absolutely necessary part of successful cast bullet shooting.
Last edited: Mar 16, 2021 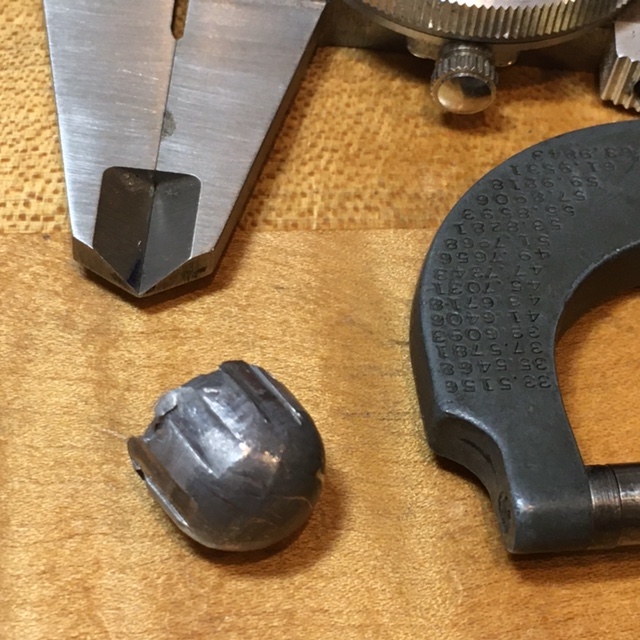 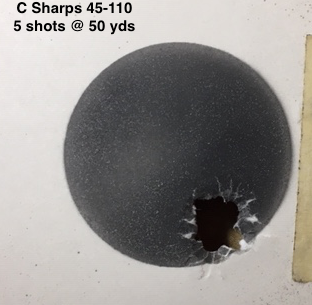 Here's how I add Dacron between powder and bullet. This is about the amount of fill to add to a 450 W case with 28 gr 5744 under a 420 gr gas checked bullet. About this volume of the filler yields a small amount of compression, once bullet is seated, to keep powder in place. I use long nose tweezers to draw the fill down onto the powder once it's started into mouth. The groove diameter of this rifle is right at .458" so the bullet is sized to .459". I use a Mountain Molds iron mold that drops this bullet at about .4595" with a relatively soft tin alloy with a hardness of about 12 BHN. I push the cast bullet with gas check through a Lee push though die which seats the gas check and trues the bullet to a diameter of .459". 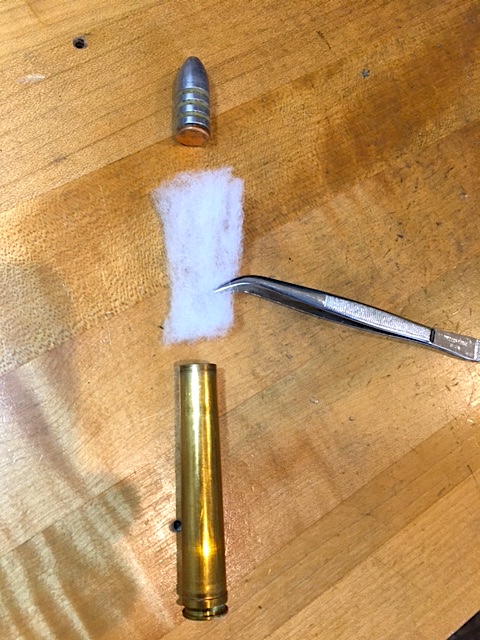 In the data that Hidgdon's sent me they made no mention of fillers. I have e-mailed to find whether this is required/optional/not needed. Also confirming primer type for these loads.
N

Here is the response from Hodgdon's...

There is no fillers used with these loads. Yes the low loads would be used for lead bullets and the 404 Jeffrey uses a large rifle magnum primer.

Understandable response, from a liability perspective. Lyman also used to have quite a few cast bullet loads and data showing fillers for many cartridges but quit publishing them. The problem with the use of fillers is people being people tend to be short on detailed understanding and long on extrapolation. Seems the difference, even though explained in detail, between the proper use of and difference between a filler and a wad escapes the understanding of some reloaders. So- a wad is a filler is a wad is a filler?? "what's the big deal and what's the difference"... Understanding is absolutely necessary for any reloading job, even the simplest one step process. Add one or two more steps, increase the necessary level of understanding and it quickly moves beyond many.

If the published load data for a given set of components is listed specifically as- A, B, C, D and E that yields a certain pressure and velocity for example, even adding something like a low density, low mass filler like Dacron, may slightly increase pressure and velocity. NOT because of the added mass of the filler (the filler usually only weighs 1-2 gr), but because it may slightly increase, on average, the initial rate of ignition of the powder as the powder is held next to the primer at ignition. And it almost always minimizes the shot to shot pressure variability. Comparing two identical and safe, appropriate loads, where the only variable between the two is the proper addition of a filler, the velocity SD and pressure SD of the load without the filler will almost certainly be higher than the load with the filler. In large capacity cases, small quantities of many powders can cause enough variability to be of concern. Usually the cause is variable powder location at ignition. Some powders in low density loads can be very position sensitive resulting in great variability of pressure and velocity. Once in a great while, low density loads of very slow ball powders have been known to cause what is called a SEE or secondary explosive event. In those circumstances, it's likely a proper low density filler could prevent a SEE. But it's usually far better to use a more appropriate powder to begin with.
Last edited: Mar 18, 2021
S

Thanks for this! Very interesting.

As another thought, what about using 45-120 load data as a start?

Very close case capacity with both at ~115gr of H2O?

Scrummy
You must log in or register to reply here.

D
drbeech1968
I did a little housekeeping in my shop and found some .500 Jeffery ammo that I no longer need. Superior Ammunition and Hendershots loaded them, along with AHR (American Hunting Rifles). Several Woodleigh/A-Square solids along with lead bullets in both 535g and 600g. Message me for any details.
52 minutes ago •••
P
pam308 TOBY458 pam308 wrote on TOBY458's profile.
Just saw your listing for a winchester 70 458. Is it still for sale? I want it!!! pam308
Friday at 7:15 PM •••