A profile of The Mountain Nyala Tragelaphus buxtoni

A profile of The Mountain Nyala (Tragelaphus buxtoni)
by Paul Evangelista, Paul Swartzinski and Robert Waltermire 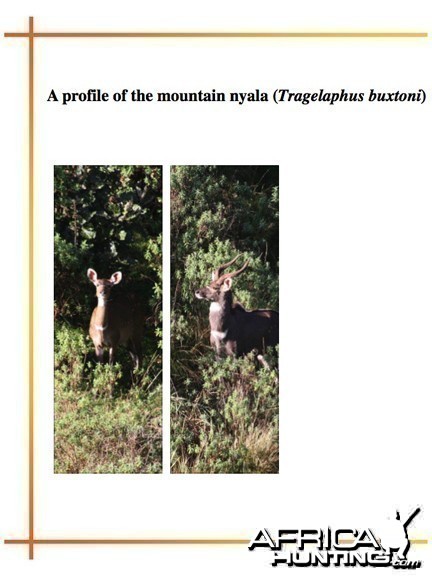 Introduction
The mountain nyala (Tragelaphus buxtoni), a species of antelope found only in Ethiopia, has the distinction of being the last large ungulate discovered in Africa. After its initial discovery in 1908 by Ivor Buxton, Richard Lydekker of the South Kensington Museum first identified the species as a type of greater kudu (Tragelaphus strepsiceros) in an article called “The Spotted Kudu” (Lydekker, 1910a). The skins and horns were sent to Rowland Ward in London, who informed Lydekker that the specimen was indeed a new species of antelope not yet documented by western science. Lydekker wrote several descriptive papers on the new species (Lydekker, 1910a, b, 1912); however, the mountain nyala received little attention from the scientific community until Leslie Brown’s expedition to Ethiopia in the early 1960s (Brown, 1963). Brown made several trips to Ethiopia, and his work is still considered the most detailed literature published on the mountain nyala (Brown, 1963, 1966, 1969a).

For several decades, information on the mountain nyala’s biology, habitat, population, and distribution of the population was largely gathered and reported by trophy hunters. Major Buxton’s mountain nyala specimens were taken in 1908 “south-east of Lake Zewei on the Arussi Plateau” presumably in the Galama Mountains (Lydekker, 1910a). Other early hunting expeditions by M.C. Albright, G. Sanford and S. Legendre and Major Maydon had also taken place in the Galama Mountains and were the first to report the occurrence of mountain nyala on Mt. Chilalo, Mt. Kaka, Mt. Encuolu, and the Albasso Forest north-west of Ticho (Sanford & Legendre, 1930; Wieland 1995). Prior to the 1960s, these ridges and volcanic cones were believed to be the only places to harbor mountain nyala populations. Rapid degradation of the Galama highlands, from burning and cultivation, was apparent, and in 1961 Donald Carter recommended that the species be listed as endangered by the International Union for the Conservation of Nature and Natural Resources (now called the IUCN; Brown, 1969a).

In response to the mountain nyala’s endangered status, Leslie Brown made two trips to Ethiopia in the 1960s in search of other potential populations yet to be discovered (Brown, 1963, 1966, 1969a). His first trip was in 1963 through the Mendabo Mountains (now considered to be part of the Bale Mountains) beginning in Dodola, traversing through the southern highlands, and ending in Adaba. His second trip, in 1965 and 1966, included expeditions on Mt. Boset (near Munessa-Shashamane State Forest), the Mendabo Mountains, the Galama Mountains (including Mt Kaka and Mt. Badda), and Asbe Teferi (presumably what is now KuniMuktar Wildlife Reserve). Brown was the first to conduct a mountain nyala survey of this scale, and his assessments resulted in the removal of the mountain nyala from the IUCN’s list of endangered species from 1969 to 1975.

Since then, only a few scientific studies of the mountain nyala have been conducted, mostly at Bale Mountains National Park (BMNP) where a dense population can be easily observed near the Park’s headquarters and the adjacent Gaysay Valley (Hillman, 1985, 1986; Woldegebriel, 1996; Stephens et al., 2001). Although these studies in BMNP have been insightful in describing behavior and population dynamics of a few isolated populations, they have not acknowledged the full range of the species within the Park’s boundaries. Similarly, other estimates of the total population of mountain nyala in Ethiopia have overlooked several significant ranges, relying on speculation rather than in-depth investigation (East, 1999; Malcolm & Evangelista, 2004; Refera & Bekele, 2004). Since 2000, there have been several significant populations identified that have yet to be reported or acknowledged by the scientific or wildlife conservation communities. The situation has resulted in a high degree of uncertainty in regard to the status of the mountain nyala, and inhibits the effectiveness of management plans and conservation strategies.

In this paper, we attempt to clarify many of the misconceptions surrounding the mountain nyala by examining published scientific literature, unpublished reports, and interviews with numerous rural people and community leaders, wildlife and natural resource managers, and government officials at all levels. This information is supplemented with five years of research, observations and data collection by the authors and research staff. Despite our efforts, we acknowledge that the scientific understanding of the mountain nyala, its’ habitat and the total population is still far from complete. However, we hope the information presented here will improve wildlife management decisions, promote the formulation of wildlife policies, facilitate scientific research, and supplement conservation strategies.

Download the entire article at View attachment 2791.
Last edited by a moderator: Dec 1, 2016
Jerome Philippe, Founder of AfricaHunting.com
You must log in or register to reply here.

Population Estimates Of Mountain Nyala On The Rise

Can a single species save an entire ecosystem?