Preface that I don't reload, so I need it to be factory ammo. I currently use the 129 grain Hornady American Whitetail round in both of my 6.5s (Tikka T3x with a Leupold 2.5-8x36 a Mauser M18 with a Vortex Viper 4-16x44) and am happy with the accuracy and performance on Whitetails. I can get for about $17 per box delivered, so under $1 per bullet, which means lots of cheap practice.

I am considering trying some tougher bullets for several purposes. One is hunting large pigs in south Georgia. Another is after a buddy of mine had a run in with a huge black bear while stalking through the woods in Virginia a few months back at a place we hunt together. 3rd is a Western US hunt for mule deer (little bigger than white tails, likely longer range shooting) that I imagine I want a bit more oomph for. I would imagine anything that has been successfully used on small to mid sized plains game would have success in my scenarios.

Some options at decent prices I see are as follows, though the prices range from about $1 per cartridge for the Core Lokt to $2+ for some of the Accubonds.
-140 grain Core Lokt
-140 grain Federal Fusion
-120 grain Remington HTP with Barnes TSX (this is smaller weight, but very solid bullet and 2910 fps)
-120 grain Barnes TTSX (tipped version but otherwise like the Remington)
-143 grain ELD-X (is this a tougher bullet? I see conflicting reviews)
-130 grain Barnes TSX in Fed Premium
-140 grain Nosler Accubond in Fed Premium
-142 grain Nosler Accubond in Winchester LR

I would very much appreciate experiences with these or other factory rounds, both positive and negative. Thanks!
T

Have used 140’s in Corelokt and Fusions on Cow elk out of a 260Rem, they all worked well. Longest shooting was under 250 iirc. I suspect the 129 interlock would have worked well too. That said, the 129 is plenty for MD, to sensible ranges, say under 400.
R

The Fusions I can't quite figure out. Bonded bullet, but supposedly quite soft, right?

The 143gr ELD-X is super accurate and does a number on whitetail. Beyond that I can't really say, but it seems like this is one of the better bullets they have made.
“I never knew of a Morning in Africa when I woke up and was not happy.”
— Ernest Hemingway

The fusions are different. The jacket is electroplated to the lead core, so it is bonded, but it’s different than a swift. The Speer gold dot bullets are made the same way. It is way to make an affordable bonded bullet.

THe ELD-X is certainly not a tough bullet, softer than the corelokt if anything, based on my .270 experience of them. I'd not use them on euro boar, maybwe your pigs are smaller and softer though?

It is a great deer round, mind.

I don't have a 6.5mm Creedmore so I can't advise directly regarding that cartridge.

I experienced stellar performance with the .257 100 grain Nosler Accubond shot from my .25-06 Remington Interarms Mark X on a feral hog hunt last April using Federal Premium factory ammo. Published muzzle velocity for that load is 3100 fps and the hog was approx 100 yards away when I took the shot. I hit the hog in the neck just a bit high of the vertebra, hog was bang-flop. The transferred energy shock was sufficient to put the hog down and not going anywhere, but it was still kicking one hind leg so I gave it a finishing shot striking the vertebrae from the opposite side of the neck due to the side the hog flopped down on. There was a golf ball size exit hole from my first shot, great expansion without striking bone on a relatively thin section of the hog's tissue. No recovered bullets. This gave me confidence risk of a bullet blow-up event at high impact velocities are low with the Nosler Accubond, and good expansion even when striking and traveling through relatively soft tissue that risk of low to no expansion after impact acting like a FMJ projectile was low even at high impact velocities.

Last edited: Feb 6, 2020
When the student is ready, the teacher will appear.
T

ryan80 said:
The Fusions I can't quite figure out. Bonded bullet, but supposedly quite soft, right?
Click to expand...

Yes, I find them to be soft. My guess is the plating process gives a bonding and still a thin jacket. But at CM velocities, the 140’s do well in most bullets. For me, they perform very similar to a Hornady Interlock, Rem CL, and the like. I use them with confidence on deer, and to moderate range on broad shots on Cow elk. I have had them fragment at higher velocities on close in Cow elk in 130 and 140 grains out of a 270 and 280 respectively, so stopped using them if the launch speed is over 2,700 fps ish by much.

For more penetration, close in black bear/hogs, a 120 mono metal may be the better choice.

Took mine out last weekend not do initial sight in. Out of everything I shot Hornady precision hunter 143 eld-x shot best 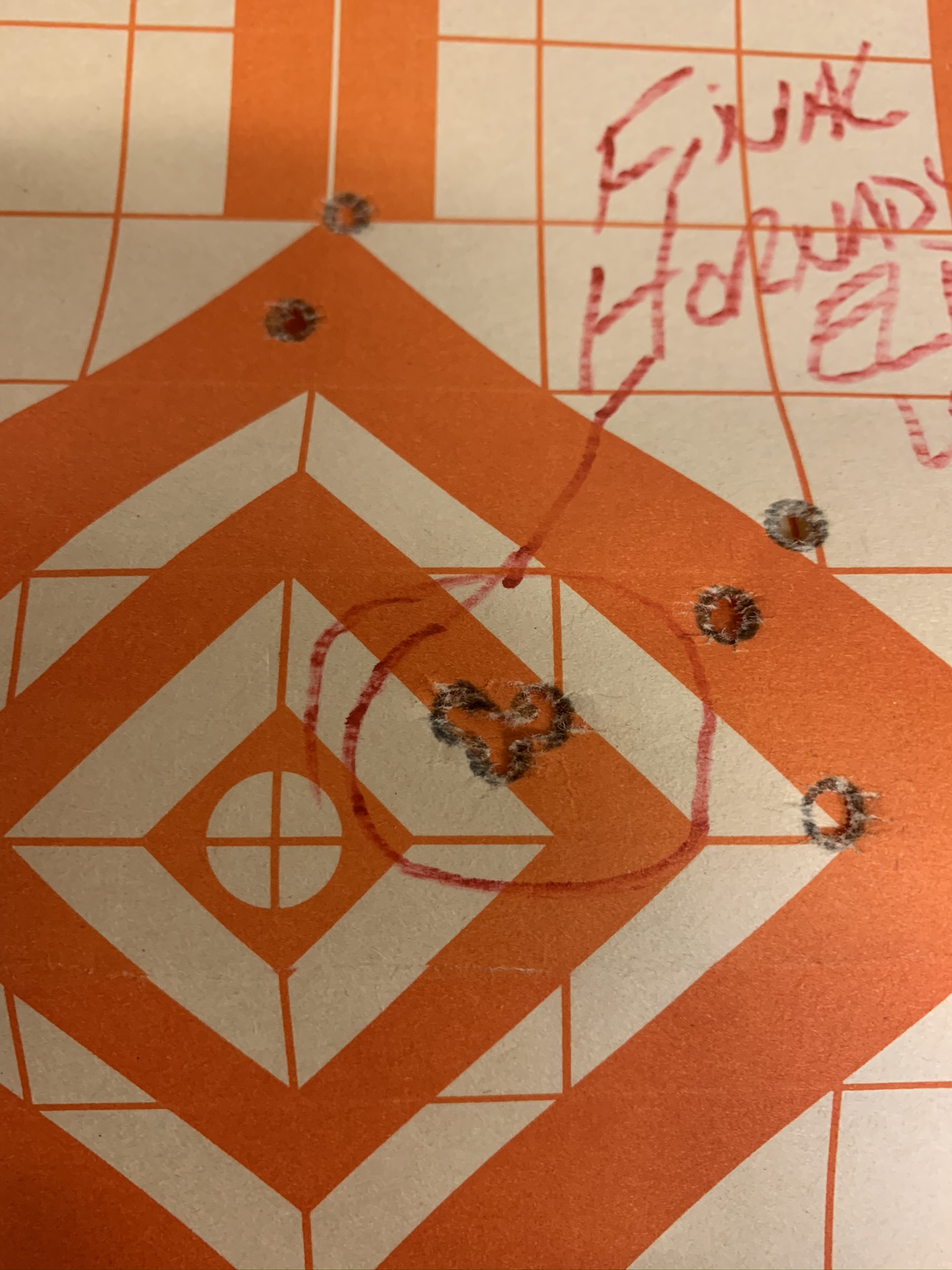 Last edited by a moderator: Feb 7, 2020
Tommorow is promised to no one. Go live your dreams.

The Fusion electroplating process deposits a jacket with uniform thickness, which IMO is less desirable than a bonded bullet with a tapered jacket profile with regard to controlled expansion. Fusion advertises internal skiving to assist expansion, and skiving is also used in some other bonded projectiles to initiate expansion that have tapered jackets such as the Norma Oryx as an example with a similar tip profile. My impression is skiving is particularly useful in initiating expansion, but doesn't really play a role in subsequent expansion.
When the student is ready, the teacher will appear.

TMac said:
I use them with confidence on deer, and to moderate range on broad shots on Cow elk. I have had them fragment at higher velocities on close in Cow elk in 130 and 140 grains out of a 270 and 280 respectively, so stopped using them if the launch speed is over 2,700 fps ish by much.
Click to expand...

Good to know, thanks.
When the student is ready, the teacher will appear.

Looks like Federal is offering a factory 6.5 Creedmoor load with what looks like their TLR Edge bullet technology, calling the ammo Terminal Ascent.

When the student is ready, the teacher will appear.

I've been happy with ammo I've purchased from this boutique ammo manufacturer. Here's the 6.5 CM offerings.

When the student is ready, the teacher will appear.
T

ELD-X has worked very well for me on whitetail, axis and hogs. Haven't used it on anything larger than that.

I wouldn’t hesitate to use the 140gr Accubond for all game you have listed. I have had great performance using them out of my 6.5x284, velocity is just under 3000 fps. In fact, I’m sitting in a stand hunting with this load right now.

I’ve taken at least 5 deer and have had a complete pass through on all shots from ~80 yards to ~ 200 yards. At Creed velocities, these bullets should perform well.

Edge said:
I wouldn’t hesitate to use the 140gr Accubond for all game you have listed. I have had great performance using them out of my 6.5x284, velocity is just under 3000 fps. In fact, I’m sitting in a stand hunting with this load right now.

I’ve taken at least 5 deer and have had a complete pass through on all shots from ~80 yards to ~ 200 yards. At Creed velocities, these bullets should perform well.
Click to expand...

I agree. Plus Federal Premium is far superior quality to Winchester and Remington anything imo. The accubond is a good choice for 200+ yards and for larger/tougher game than a deer
WOOOOOO!!!
S

The above thread is about the best review of the 6.5 CM anyone could wish for. The hunter was clearly an excellent marksman too, btw.
The load was a 129 gr Hornady SST.

I reload, but I've shot a small amount (two or three boxes) of factory Hornady 129 gr SST spread over a couple of 6.5s. My Tikka T3X Lite liked it very well, with good accuracy to 600 Yards. It chronograped suprisingly fast at 2,997 fps using a Magnetospeed.

A long range precision shooter at my gun club used factory 143 gr ELDX on a New Mexico Oryx in a 6.5 CM, and swears by it. One shot kill. The bullet did not exit if that matters.

For tougher game with factory ammo, the 140 gr Accubond gets very good reviews as does the 120 gr TTSX (Barnes).

I reload the 140 Swift A-Frame, but have not tried the factory load.
GA Hunter 2/2/2019: "....tell your outfitter and PH that a big kudu would mean a lot. Then go enjoy yourself and take what the bush offers."
You must log in or register to reply here.