These readings seem much lower than I expected, and felt recoil seemed remarkably higher than these velocities would suggest. I'm suspicious that I'm not getting correct readings from my chronograph.... BUT, when I clocked some reduced loads, 600gr cast bullet over 50gr of 5744, it was spot on where it should be, 1483fps. Maybe I've got an extra slow batch of H4831, or maybe I should change powders. Helpful insight would be greatly appreciated.

So far, it seems to me, two things are occurring. One, I've got a slow batch of H4831. Two, I've got a chronograph that's reading low. I've got a new chronograph on the way, that will definitely clear things up, I hope! Thank you for your input.

Where did you get your load data?

Barnes lists RL22 with the 525 TSX, 125.5gr - 133gr, for a max velocity of 2223fps. I know there's not a direct substitution using powder burn rate charts, but H4831 looks to be very similar, if not a touch faster than RL22. Basing a theoretical max of 130gr (conservative) of H4831, reduce 10% and work up. So extrapolating Barnes data, 129gr of RL22 should produce ~2127fps; believable. Using the same bullet, case, primer, and then substituting a slightly faster powder, H4831, using 129gr gave me 1933fps, about 200fps slower than expected. But, a second chronograph will certainly clear things up.

I corroborated my original numbers with a new chronograph, and both are reading the same. I guess I've got more work to do!!

Have you fired and chronographed factory loads? What was the result?

This is a good mystery! Don't just fade away on us!

I've not fired factory loads in this, and at $15/pop, I doubt I will anytime soon. And yes, I'm using Large Rifle Magnum primers.

I do not have a copy of the A-Square "Any Shot You Want", but apparently they have published data for H4831 under the 525gr bullet. If anyone has a copy, feel free to share. I'd be interested to see their results. 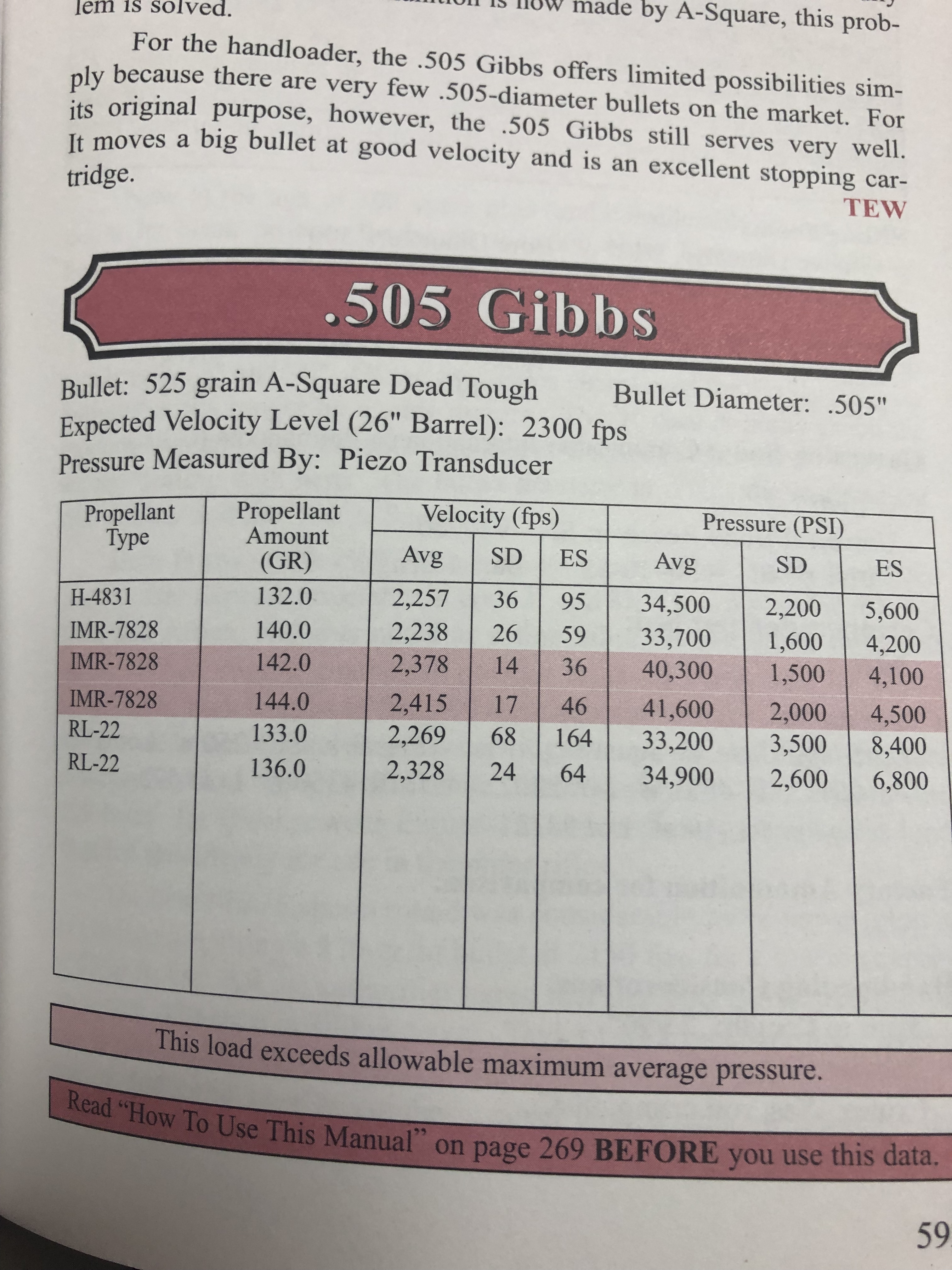 Please let us know the result when you have the bore slugged. I would think a gunsmith could do this quickly and at little cost to you.

Hmm, I'd be tempted to buy some .510 diameter bullets and order a custom bullet sizing die from Lee to size them down to .507.

Interestingly enough, as I was pushing the bullet down the bore, it became very easy once I neared the chamber, but still several inches up the barrel from the chamber. That tells me that where the bullet is initially engraving into the bore, it's fairly oversized. That's probably why this rifle appears "slow", as I'm getting a fair amount of escaping gas. I do shoot cast bullets, .507" 600gr gas checked, out of this rifle as well. I've got reduced loads of 5744 and full tilt 140gr of H4831. I haven't chrono'd the full tilt loads, but the reduced are spot on with other people's results. I'll post them here after my next range session.

Interestingly enough, IF it would chamber, and I don't know if it would in my rifle, but you could run .510" bullets in a .505 Gibbs all day long and it would do it quite safely. After reading some work that PO Ackley did on a modified rifle, shooting 8mm bullets out of a .30 cal barrel, bullet diameter, especially within a few thousandths, is the least of your worries.