I recently bought a Merkel in a 500 NE; I already owned one in 470 NE. Both fit me perfect, same length of pull. The 500 feels like it may weigh 1/2 lb less due to the bores and the same OD barrels, but I haven't weighed them. I was a 470 fan and have probably run around 600 rounds through that rifle. I got the 500 and was prepared for a huge jolt; but nothing dramatic. To be honest the felt recoil was less than the 470 to me. The thing is to try the two calibers out and see which one you like.
V

I have shot both and ended up with a 500 NE. However, I was much is a similar situation of the one Double D described above. I was looking to order a 470 NE and found a good deal on a beautiful 500 NE so I jumped on it. I do not regret it at all. When I shot both in one setting, I could tell a slight increase in recoil from the 500 vs the 470 but it was not bad. I have since shot my 500 a decent amount and it is enjoyable to shoot. I posted a short (and grainy) video of me shooting a watermelon and water jug with my 500 NE in this forum. It is dramatic display and was a lot of fun. You really can't go wrong with either.

I too hope to take my 500 NE on a buff and/or elephant hunt sometime. I may even take it on a lion hunt this year.
P

if i wanted something smaller then a 500 NE for a double, id go with a 450 NE 2.35". ive never been interested in the 470 NE but thats just me as there isnt any thing wrong with the cartridge.

matt85 said:
if i wanted something smaller then a 500 NE for a double, id go with a 450 NE 2.35". ive never been interested in the 470 NE but thats just me as there isnt any thing wrong with the cartridge.

Phoenix Phil no I am down close to Sierra Vista. I am up your your way a few times a year. Maybe the next time up I can coordinate to meet you at Cabelas or Bass Pro depending on which side of town you are on, and bring my 450 and 405 up with me. or if you are down my way?

AZDAVE said:
Phoenix Phil no I am down close to Sierra Vista. I am up your your way a few times a year. Maybe the next time up I can coordinate to meet you at Cabelas or Bass Pro depending on which side of town you are on, and bring my 450 and 405 up with me. or if you are down my way?
Click to expand...

I don't get down that way very often. I used to deer hunt in 36B, but the trouble on the border and the risks associated with the drug runners spooked us out. I'm not terribly far from Bass Pro so that may work. If you want to do some shooting, there's a range not too far from there that I shoot at.

Phoenix Phil Yea understand the border crap and deal with it all the time, Haven't hike our mountains unarmed since the 80's. Kinda sad. Shooting always sounds good. My OCT is already slammed. So maybe we can look at something in NOV, let me see what I can shake out of the schedule. Have a great day 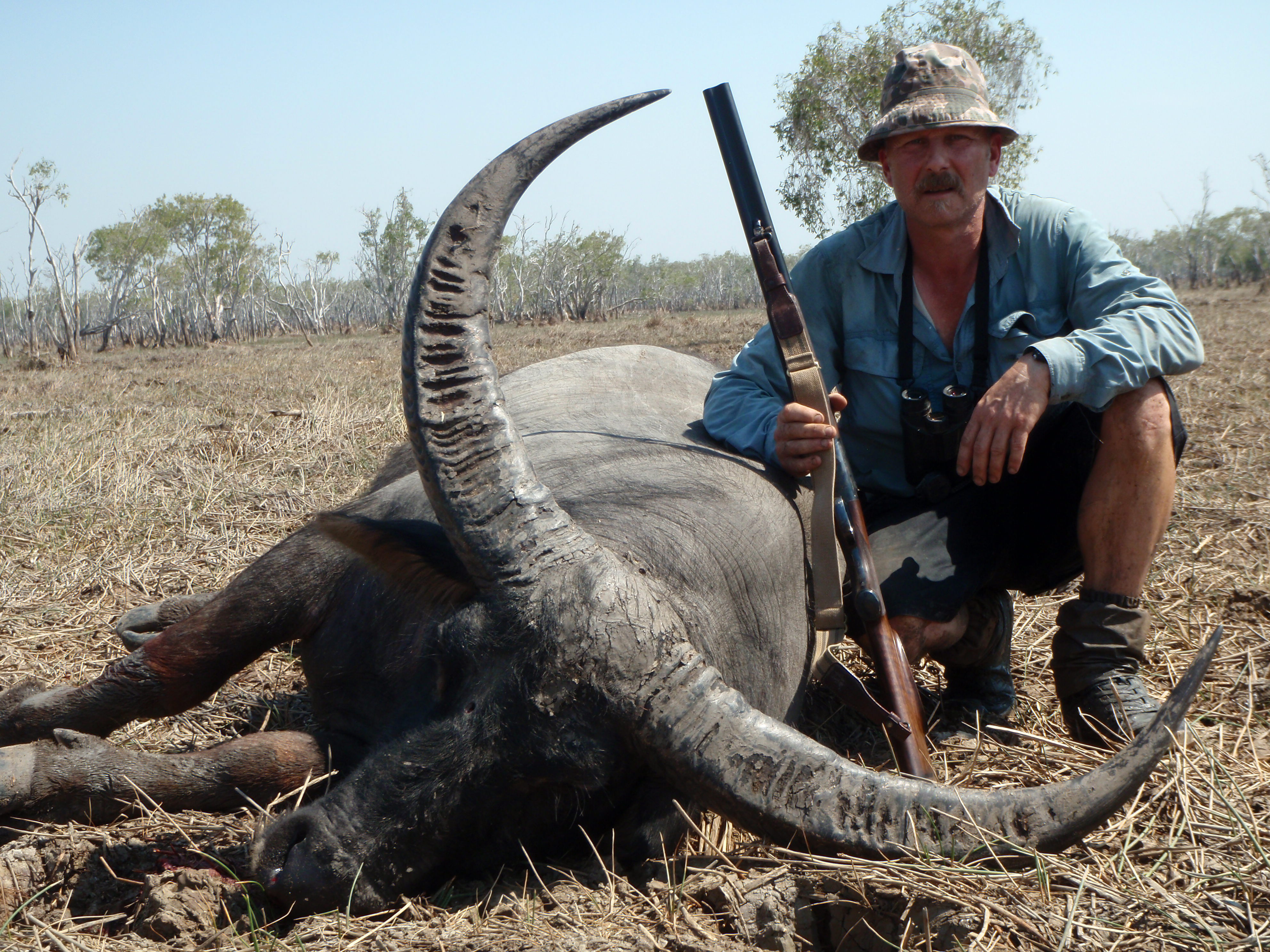 This is my own V.C and a good N.T bull.
Paul Truccolo.
B

Member of
SCI and NSK

I ran the numbers of the three guns through one of those recoil calculators on the internet, and found the recoil speed of the .500 to be faster than the .450/.400, and 50% more recoil energy...!?
Towards the mentioned .470 the difference was slim, but still the .500 would recoil more in every aspect. I find that a bit hard to believe? I mean, a fully 2 lb heavier rifle must soak up more than the difference of 70grs of bulletweigh?? Apparently it doesn't, but I bet the felt recoil would be somewhat slower, giving the feeling of beeing more bearable? Or at least not heavier than the .470..?! I definitely need to try a .500 and see how it goes before I toss the many coins...

Long time since I had such a good laugh!!
B

Relative recoil factor (RRF)...i have pulled some data from my library...

Back to the statement of the topic starter:


roughshooter said:
I expect to use the gun almost exclusively for cape buffalo and maybe occasionally elephant.
Click to expand...

In that context I would choose the .470...wich is plenty for taking buffalo..
The only reason to go for a .500 (or more..) is if elephant is to be taken time after time..
A bolt rifle in .500 Jeffery is also a good option for ele..
"I have taken more out of alcohol than alcohol has taken out of me.” Winston Churchill

I am going to order my first double rifle in the not too distant future. I expect to use the gun almost exclusively for cape buffalo and maybe occasionally elephant.

I had been set on the calibre of .470 Nitro Express. However I have recently read the book written by Terry Wieland on Dangerous Game Rifles and it has made me stop and think.

Mr Wielands' book appears well written to me and he makes some excellent points.

He suggests that .500 NE is actually a more preferable cartridge to .470 NE, and considering that the rifle I will be ordering is the same price in both calibres I am interested in members opinions and experiences on felt recoil.

I also and considering the availablity of .500 NE versus .470 NE if my ammo ends up in J'Burg and I (and my rifle) am in Namibia or something like that.

I am used to shooting a 9,3x62 Mauser and find the recoil perfectly acceptable but am concerned if I go 'a calibre too far' when buying what will be my only double rifle I might be inclined to wish I hadn't.

Totally undecided on this one and it will be at least until October until I have the chance to shoot either calibre as the opportunity to shoot these big bores in the UK at least if very restricted, owing to our gun laws. I won't order anything until I shoot both calibres but value all your comments and experiences.

I was in your shoes last year trying to decide. Several PH’s said I should go with .470 but it was the Kreighoff rep that convinced me to go with .470. He said he could shoot the .470 all day long but several rounds from the .500 wound up giving him a bad head ache. I can tell you they both have monster recoil that is particularly hard on my neck. Make sure to have it fitted to you and practice with a shoulder pad to start off with.
I am very glad I got the .470!
Philip

Faster second shot recovery with less recoil on the 470?
Total sufficiency of the 470 for all scenarios?
More ammo availability in country with a 470 over a 500?
Better penetration with a 470?

In saying that, being in Michigan, access is limited and I have never fired a 500NE.

I can tell you this though, I have a Krieghoff. It fits me well. Comes to the shoulder easily. Heavy and solid and it has the BreaKO recoil reducer. It maybe in the 11-12 lbs range but I have never taken the mass.

For me anyway, it feels like only a little more push than I'm shooting magnum 3&1/2 inch loads out of my Beretta A-400. Difficult to equate the two. I have a cz550 in 416 rigby and I find that it pushes back and is snappy as far as recoil goes. The 470 Krieghoff seems easier to shoot.

I plan on using it for Cape buffalo and maybe 1 time elephant if we can ever have the opportunity to import again.

I had a rigby in .470NE and found it to be excellent. I only shot 2 buffalo and one old elephant bull with it, but it was plenty for either species. I sold it about 10-12 years ago. My only heavy rifle these days is a model 70 in .416 Hoffman. I’d like to get another double and if I do, it’ll almost certainly be a 470.

My problem is I recently had surgery to repair a complete tear of my rotator cuff on my right shoulder, where I mount guns. Can’t shoot a rifle for 10 more months, then not sure how much recoil my re-built shoulder will be able to handle. Gonna be interesting to figure out which caliber I can shoot going forward. I hope I’m not restricted to a 375 H&H.
You must log in or register to reply here.