I recently got hold of a not so common rifle, a .458 Mannlicher Schonauer, the rotary magazine impressed me a lot, the action is extremely smooth, no Mauser action can hold its ground regarding the smoothness when feeding the rounds, it is light weight as well...it shot about 50 x rounds according to the previous owner. The price was more than decent, very cheap, since the owner is a friend and he does not hunt much..... 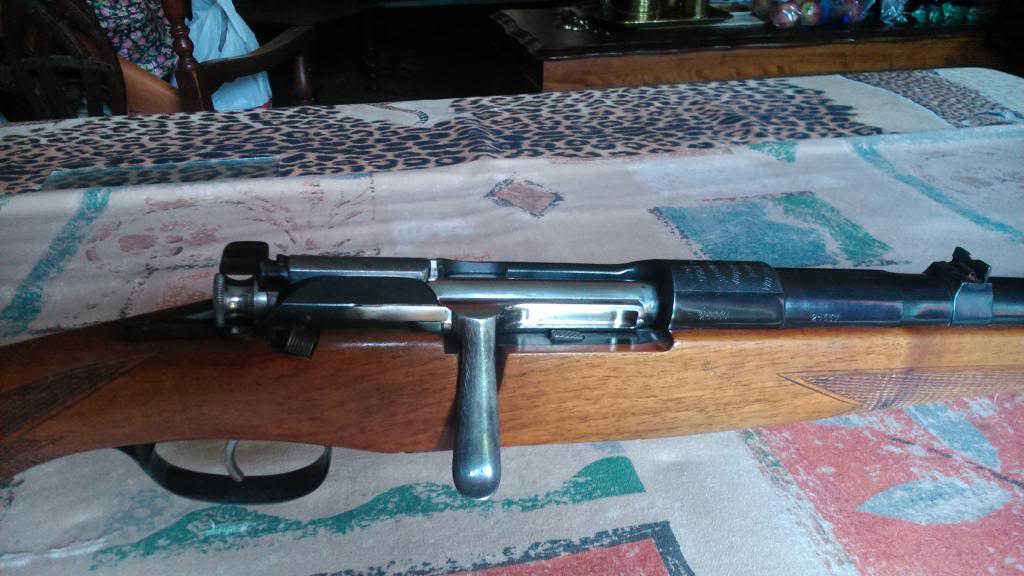 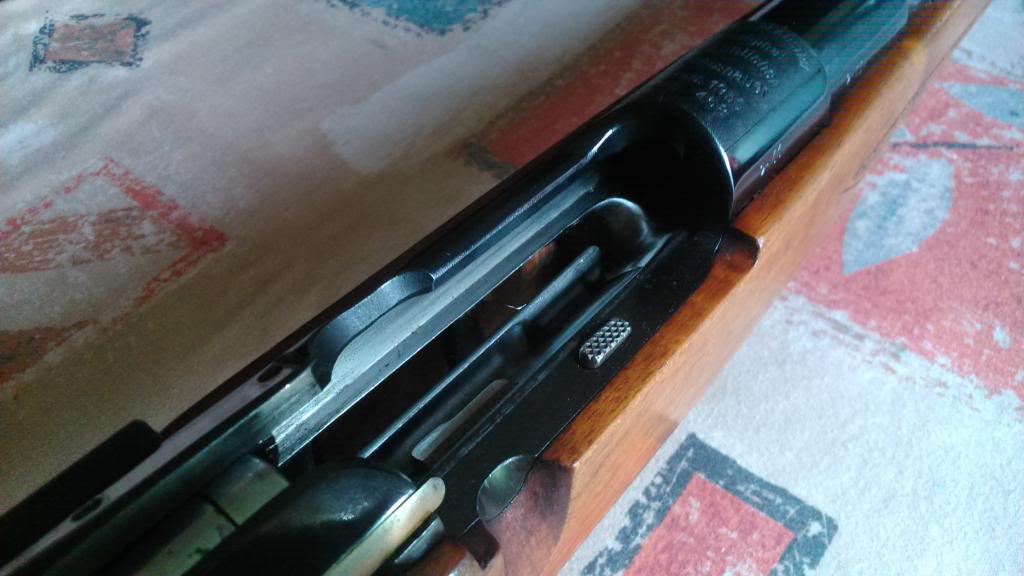 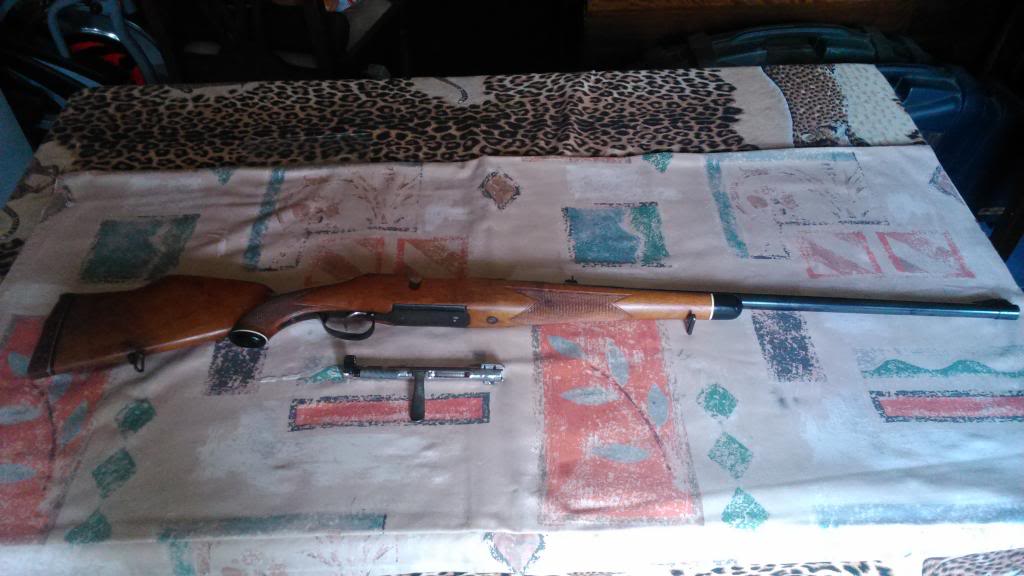 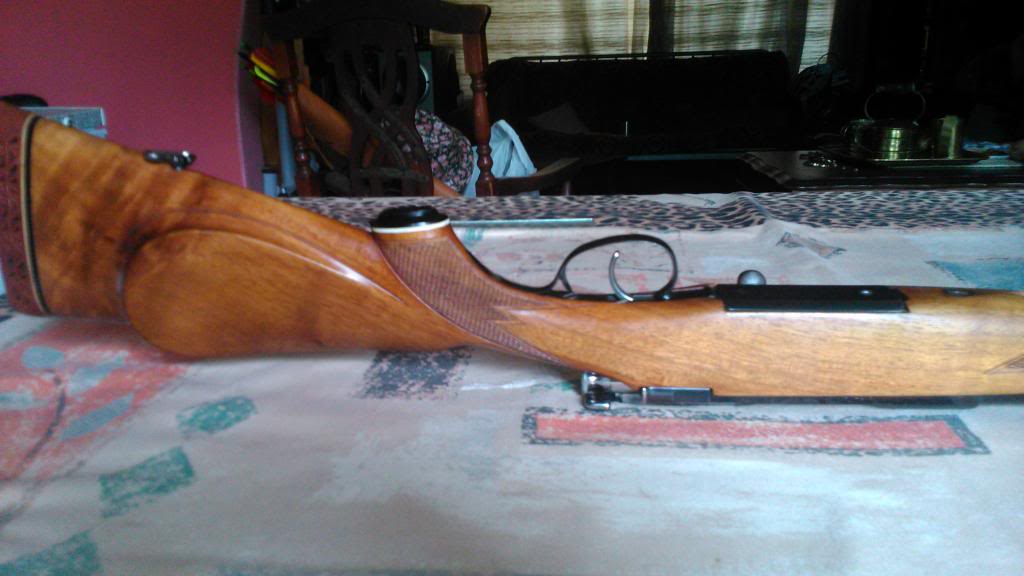 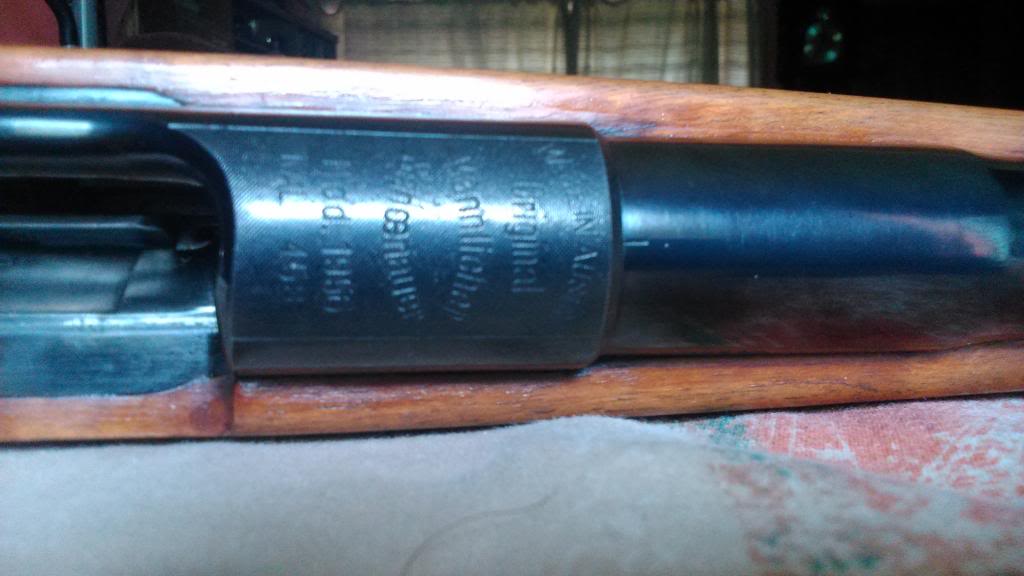 Mannlicher Schonauers are undeniably lovely rifles. I have one,a 1903 rebarrelled in 308.
I am on the hunt for one in 7x57. When/if I go back to hunt in Africa I want to use this classic.

Nice find and great gun for your hunting rifle collection.

did you take it to the range and give it a test?

Good day James/Sika 98k
I did shoot it and it has a mild recoil, I need to adjust the stock length of pull by shortening an inch...then it will fit me well and I will be able to shoot it comfortable..it is my intentions to use it extensively...as I am using my 404 Jeffery...

Congratulations on another great rifle.
And here I am, returning to Africa of many faces;.... the sloe-eyed temptress with flowers in her hair who stole my youth and my heart, and left me an old man with a kaleidoscope of conflicting memories of many dashed hopes and some fulfilled dreams. E. Echols

Wheels/Ennyse
Thank you, yes I think this rifle will be with me a long time to come...I will hunt with it next year, bushveld hunting...maybe in the future I might be lucky to get to hunt a buffalo or something big...

That is a pretty cool rifle. I really like it.

How many rounds does the rotary magazine hold?
HUNTERS make importation bans work!

That particular make and model in caliber .458 is somewhat rare and I believe you might be surprised at how much more it is worth than what you probably paid for it.

As a "working shooter / hunting rifle", you already mentioned that it is a very slick feeder, and I agree they are one of the smoothest feeding bolt actions the world has ever seen.

They are very well made and you mentioned that you have fired it so, you already know that they are typically quite accurate, even in .458 (perhaps especially in .458 as most .458s in any brand are usually accurate for some reason).

I am a bit envious,
Velo Dog.

Royal27/Velo Dog
Thank you for the reply, it takes four in the magazine...Terry Irwin(Tanzania) and Richard Harland(Rhodesia) had the same caliber and make, they prefer this rifle to cull elephants especially when it is herds that needed to be culled in the old days( Rhodesia/Tanzania). They said this rifle did not shed the rounds when they had to shoot very quick and accurate...the only drawback was the 26" barrel since Mannlicher Schonauer company said it is the only way these rifles reach the intended velocity...Terry Irwin shot more than 1000 buffalo ....and a lot of Elephants, so did Richard Harland as well....I am extremely fortunate to got hold of this rifle...I had an offer of $5300 it equals R60000 ....from an American member on another forum...my take on it, I rather keep this rifle...money is not the only thing in the world that matters....

Hallo Garry, good to hear from you ...thank you kindly, Terry Irwin and Richard Harland both pointed out they got used to it without any difficulties, I think it will take time to get use to the bolt cycling procedures without short cycling it , the positive side to it surely is the extremely smooth bolt action of this rifle..it is just unbelievable... it therefore will not be a problem, I will get back to you when I start to shoot this rifle frequently, I will be taking it to the Big Bore shooting days ....there it really will be tested and I as well will be tested while taking it through it`practice runs....the bolt is spring loaded and move on its own back into position...it really is difficult to explain how smooth this bolt action is...members whom have similar rifles will surely know....I will get back to you when I engage into practice shoots with this rifle and will be able to give you a good answer in this regards, I will use the 404 Jeffery to compare the cycling of these two rifles....

My sense is that you are absolutely right. That it will be fine with practice. I've seen more than one person struggle with a Blaser when they first got the rifle. But with just a little practice those things are dang fast!

A beautiful and very rare rifle. I hope you treat your friend well.
In the PH testing in SA or Zimbabwe a few years ago, the Mannlicher-Schoenauer in .458 Winchester Magnum was rated at or near the top in all around "when the chips are down, this is what will save your bacon" performance. Most Mausers had to be tuned and there were various faults with Model 70's. Only the CZ's and older BRNO's approached the level of performance of the Mannlicher-Schoenauer Magnum in .458.
Honor the treasure you have been given. Thank you for letting us see this splendid example of gun making art.
Steve Steyr
S

A couple more comments:
The Mannlicher-Schoenauer Magnums were based on the 1950 action, the last action with the straight vertical bolt. The action was lengthened slightly (see Stoeger's Shooter's Bible from around 1958 or so for a detailed diagram).
If you plan to shoot a lot with full power .458 loads, you might want to check to see if the recoil lug area needs reinforcing. I see no cross bolts on your rifle and Mannlichers had a very short distance from the recoil lug to the magazine well. I have seen quite a few older MS's, especially in 9.5x57, that had cracked from the recoil lug into the magazine box. A few were split from the magazine box to the trigger cutout and a few were split at the tang where the recoil force over time had split the wood. This can be prevented with proper glass bedding and maybe some internal metal rods perpendicular to the axis of the bore at the recoil lug.
Some purists get the vapors at the thought of these alterations to an original and rare rifle but the alterations are better than a split stock.
As far as the far-forward bolt placement being a hindrance....The Mannlicher's smoothness and a bit of practice should overcome any time lag. Actually I think this argument is more imaginative than real. It reminds me of those folks who try to argue that a short action, in a pinch, is a lot faster than a long action. At the same time the .375 H&H, which requires a very long bolt throw, is heralded as the absolute best all-around cartridge.

Thank you for the replies it is much appreciated. I do not have access to big game hunting or a lot of hunting through the year. This rifle will be used, as my .375 H&H Magnum and my 404 Jeffery as well to participate in Big Bore shooting competitions. The possibility of the stock being crack is less possible...I am contemplating substituting the original stock and store it for the future while building a stock to fit my own physique. I do not consider any alterations to the original stock it needs to be as original as the day it was manufactured.
I will update this thread when commencing with the project.

Steve, since you mentioned the problem of developing cracks in the stock of the heavy recoil hunting rifles , I noticed a few posts on the rifle forums regarding this problem specifically on the .458 calibers...I personally know of two .458 calibers who in the recent past came to my attention. My opinion in this regard is that at the back of the tang there is left a too small space between the metal and the stock , since the manufactures do want a perfect fit ....this creates a pressure point where the metal flex against the wood when detonation takes place..this in turn builds pressure up and a hair crack develops through the base behind the trigger guard and in front there off...I have noticed it once on a small- caliber 8x57JS Mauser as well ....but it definitely is a common defect...another cause maybe the grain of the wood is not going horizontally through the grip of the stock and therefore it is weak...this I have noticed as well...
B

Beg your pardon .. I know the name Mannlicher-Schoenauer, but when you say .458 do you speak about the .458WM or another one Watt for instance ?

Yes Bebo, it is theMannlicher Schonauer .458 Win Mag configuration....if I am correct the .458 caliber came into being in 1958 the first time ....Mannlicher Schonauer saw it fit to make use of this new hype surrounding the .458 dangerous game caliber....the .458 Mannlicher Schonauer came with a 26" barrel , according to one of the great Hunters/PH of the past Terry Irwin , Mannlicher stated they will not shorten the barrel to 24" when he ordered a custom rifle to fit his physique ...."They said you could not get the correct ballistics with a shorter barrel" Terry Irwin said. He mentioned he never got any reloading/ballistic problems with his .458 Mannlicher Schonauer...it even gave better penetration than his .375 H&H Magnum...this really is an old grand rifle...
You must log in or register to reply here.

H
The Battery of an Old School Professional Elephant Hunter
2