I was hoping that someone might have load data for 400gr bullets in a 450 Marlin case. I an building a bolt action rifle and was hoping to get away from the lever gun ammo in 325 and 350 grain.

Case dimensions for 450M and 458 WM are really close, except obviously length. The limiting factor on 450M is going to be case length/capacity. And unless you're going to Africa after DG, even the 45-70 loaded up with some Beartooth Piledriver 525 gr or PD junior 425 gr at 1600-1700 fps will easily dispatch anything in North America. Getting to 1900 fps with something like a 525 doesn't improve ballistics significantly over 1625 or so, and it certainly doesn't improve lethality on the thin-skinned game we have here.

Plus, since Marlington doesn't make the 450M anymore, and they never sold a bunch of them, brass will be a lot harder to come by than either of the magnum 458s.

450M is a fine cartridge for what it was designed for, but it sure seems like you're trying to make a silk purse out of a sow's ear.
"Only accurate rifles are interesting." -- Townsend Whelen 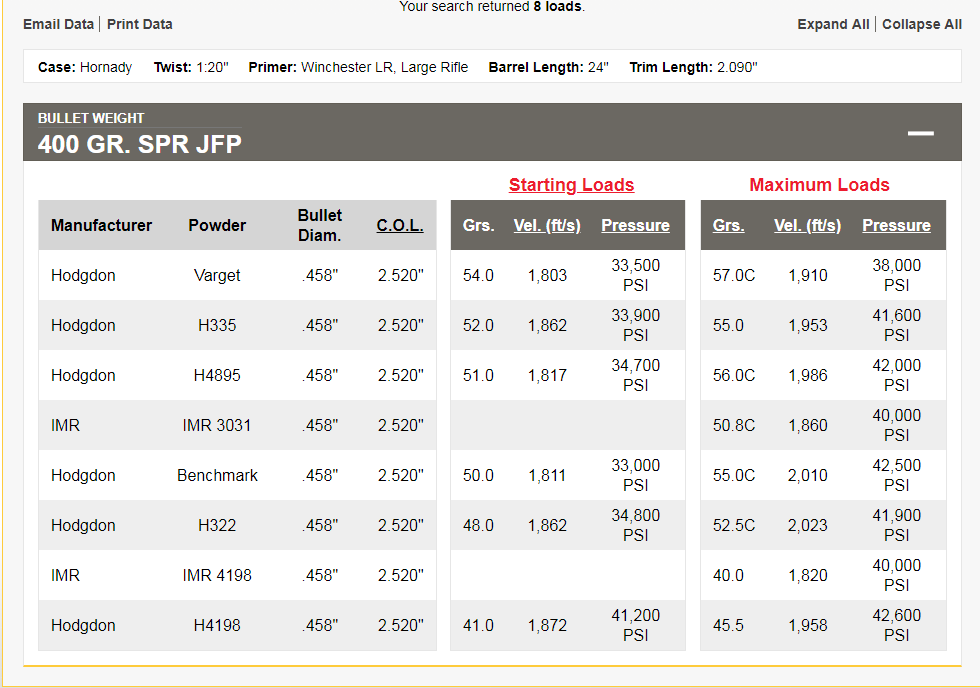 "I am not a good shot, but I shoot often" - Theodore Roosevelt

I have a ruger 77 custom in 450 Marlin. Since it is on a bolt action and I don't have to worry about a levergun pressure requirements I started with the max loads on the Hogdon web site and worked slowly up. You can also look at 458 American loads. The 458 Armeican is a 2 in case if my memory serves me and the 450 marlin is 2.1 in. They have about the same case capacity. I will have to look at my notes for the loads I found that gave best accuracy and what the speed was with them.

It is a fun short action thumper. I say if it floats your boat go for it. I enjoy mine
You must log in or register to reply here.