so far the only load data I can find for the 450/400 NE cartridge is in my Hornady book and the info is pretty limited in there.

does any one have any load data for the 450/400 NE cartridge? pet loads would be welcome as well!

the gun im looking at is regulated to the hornady DGX/DGS cartridge but im hoping to imitate it with Woodleigh bullets (i do not trust hornady DGX bullets).

thanks
-matt
"A buffalo could probably be taken with a well placed frozen herring but, the question is: "What's the point"?" -Velo Dog

Matt if your looking at a double get graem wrights book shooting the British double it has load data but more important it explains how to work up loads and regulate for a double. I have found no other book for double rifle load data to work like this.

+1 on Graeme Wrights Book! it''ll have what you need to load and understand a DR.
H

P.S. DGX/DGS are cheap enough for practice and the loads above are what I use in my double.

thanks hunteratheart. could you tell me a little more about the solids you use?

side note: i personally don't like the DGX bullet. its the year 2014 and we shouldn't be using non-bonded soft point bullets on dangerous game. the DGX is probably fine for hogs, elk, moose, and other non-dangerous game but i don't see it holding together as well as a bonded bullet. both Woodleigh and Swift manufacture a bonded .410 400gr bullet, either of which would be far superior to the DGX.

-matt
"A buffalo could probably be taken with a well placed frozen herring but, the question is: "What's the point"?" -Velo Dog
H

Solids are straight out DGS. Haven't found need to change them out. DGX are obviously a different story.

on the topic of cost, the Woodleigh 400gr bullets are only slightly more expensive then Hornady 400gr bullets (an extra $10 per box).

my copy of "shooting the british double rifle" showed up today and has already proved very informative. I will spend more time reading threw the book when I find more free time.

thank you
-matt
"A buffalo could probably be taken with a well placed frozen herring but, the question is: "What's the point"?" -Velo Dog
S 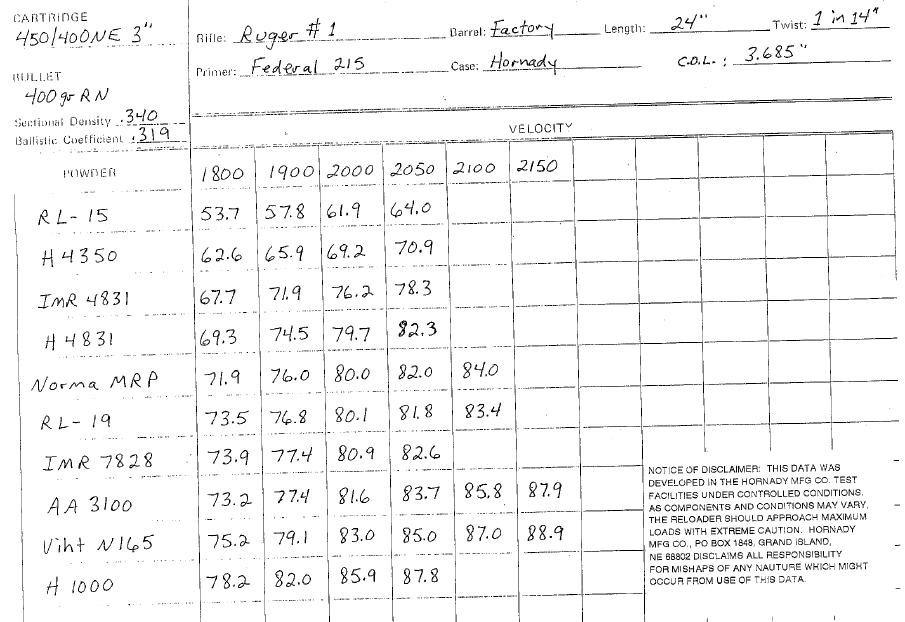 "Q: I am trying to get loading data for the .450-400 3-inch Nitro. I am shooting both cast bullets and 400-grain Woodleigh bullets in Bertram cases. I also need to know about the Dacron filler. Do I need it in the .400?"

A: There are two variations of the .450-.400 x 3-inch cartridge. The "trade" model had a thin (.040-inch) rim and normally used 60 grains of cordite with a 400-grain bullet. Jeffrey used a thick rim and only 55 grains of cordite. Either one likes the 1.19 multiplier of Reloder 15, with a Federal 215 primer as a duplicate to the original full-power loads. That is to say, 1.19 times the 55- or 60-grain cordite charge. Normally, you do not need Dacron in the .400s. However, if you experience any form of hangfire (this will probably be as minute as your thinking you can hear the hammer hit before ignition), add 3 grains of standard polyester pillow stuffing over the powder. This load is compatible with the Woodleigh softpoint bullet. If you use their solids, reduce the powder charge 2 grains.

For cast bullet shooting in the .400s, we discover a wonderful phenomena in cordite double rifles. Against all conventional wisdom, they will usually regulate perfectly with a very reduced load, by simply pretending they were black-powder rifles. Now we turn to the nitro-for-black-powder formula. The 3-inch case was not a black-powder round, but its 3¼-inch older brother was. It normally used 100 to 110 grains of black and 230- to 260-grain bullets. Hodgdon 4198 is the powder of choice. The formula is now 40 percent of the black powder weight.

Load with a standard Large Rifle (not magnum) primer and begin with 42 grains of 4198. The nitro-for-black loads must use Dacron; 10 grains will be correct, over the powder. Add a hard 230- to 260-grain, .41 Magnum pistol bullet and you will have a nice, friendly deer load. Most rifles regulate perfectly, although it is often necessary to use the 200-yard sight leaf to get correct elevation at 100 yards."

Note: In Miniature Black Powder Express Cartridges, Handloader #225, Seyfried states the Dacron must fill the case and not be tamped down on the powder as a wad.

"Unlike the earlier black-powder rifles, most nitro rifles will have the service load stamped on the barrel flats as part of the proof marks. This usually specifies a maximum load of cordite and bullet weight. One usually encounters something like "cordite 70-bullet 480 max."

"Slug the bores and make chamber casts before you buy components. Finally be sure you are indeed working with a "full-cordite" rifle. Many unknowing or unscrupulous sellers call every British express rifle a "Nitro Express". If the barrels do not show the cordite charge in the proof marks, they are probably made for black powder."

"The correct powder for the nitros is also surprisingly simple. Most who are serious reloaders for the nitros have distilled the selection to one powder: Alliant Reloder 15. You will see and hear references to other powders; IMR-3031 and some of the very slow ones like 4831 have been used. In my experience IMR-3031 has a shrewish temperament in the big cases, demonstrating rapid pressure rises. The slow powders have blown the sides out of more than one set of fine double barrels. No one has a precise answer to "why?". Because it has happened, I treat the slow powders like the standard medical formula, "Doctor, it hurts when I do this." Reply: "Do not do this!"

"Returning to our chosen fuel, RL-15, its use and perfection was invented by none less than Federal Cartridge for their own .470 Nitro cartridges. It is a mild-mannered, delightful powder that re-creates original ballistics, right across the spectrum from .450-400 to .600, using the same conversion formula. That is, multiply the original cordite charge by 1.19 to substitute RL-15. In almost every instance, caliber and rifle, the velocity, with the correct Woodleigh bullet, will be right in the Kynoch window. (It is a good idea to begin two grains below the calculated charge, just to be on the safe side.)"

"The one compromise with RL-15 is that it takes up less space in the cavernous cases than did the original spaghetti-like cordite. To obtain perfectly crisp ignition, one must add a small ball of Dacron (polyester) fiber filler. Most .40- and .45-caliber rounds want four or five grains, while the .470 and .500 use six or seven grains and the .577 and .600 take seven or eight. Loads without the filler can demonstrate minute, but disconcerting, hangfires. Those with fillers are crisp with uncannily uniform velocities."

Great info from a trusted source, Ross Seyfried. Thanks for taking the time to include all the info you did.

On what reloads have you settled for your 450/400 NE double in the end?
Have you tried by any chance 300gr SP Hornady intermidiate loads in your double?
L

On what reloads have you settled for your 450/400 NE double in the end?
Have you tried by any chance 300gr SP Hornady intermidiate loads in your double?
Click to expand...

-matt
"A buffalo could probably be taken with a well placed frozen herring but, the question is: "What's the point"?" -Velo Dog
You must log in or register to reply here.

M
matt vejar kevin masters matt vejar wrote on kevin masters's profile.
Kevin,
Played rookie league for the Yankees in Paintsville after winning the College World Series at Fullerton State, in1979. All I could think about was the movie “Deliverance”- lived up in a hollow with some other players. Refused to go on a moonshine run because it was a dry county-no way. Met some of the nicest people on the planet there! Van Lear the home of Loretta Lynn was highlight of summer LOL.
Yesterday at 9:46 PM •••