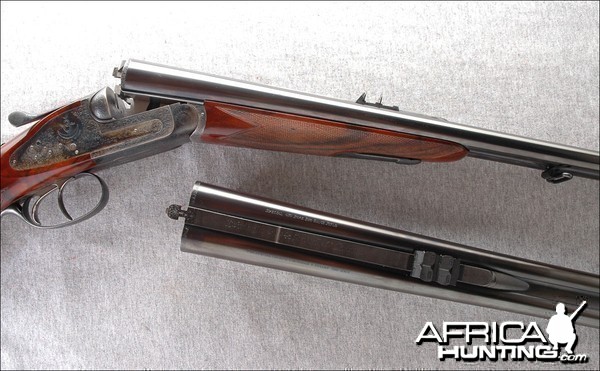 John Rigby and Company Sidelock Double Rifle in .416/470. a special caliber deviced & customized on order for One Maharaja in India for his dark continent expeditions, this game double SxS rifle is of substance, with magnificent wood and metal work. Fantastic figure is found in the walnut stocks, tasteful engraving with the Surguja State Crest on the locks embellishes a rock-solid action, with dolls head extension with rear V sights 100 fixed 200 &300 yards leafs and ivory bobble foresight which was used for his night shoots of tigers & Leopards from a machan (Hide) on a kill.

This rifle was built for the Maharaja Ramanuj Saran Singh Deo (1917-1965) of Surguja State (India) in 1939. This is the only double of that caliber made by John Rigby & Co.

With this rifle of his he nearly took 500 + odd tigers ,leopards & lots of game species in Indian Subcontinent & in Africa. He has the world record of taking 1157 tigers in his life time. And it said that after his 1100th tiger he left keeping the count of the Tigers he shot , which is estimated the head count went upto 1710 tigers.

This finely engraved rifle is believed to be available at Cabelas now which was bought by some American Hunter in 1970s. from the Sarguja Royal family. 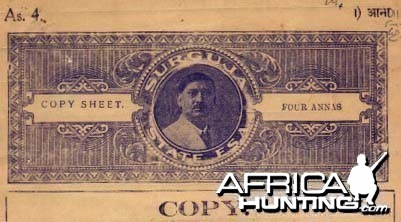 A beautiful firearm with a very unique history. I wonder what it will sell for ???
Probably more coin than I'll ever see.

Wouldn't this be the ultimate piece for a full bag 28 day hunt in Tanz ?

Its must be a masterpiece,with a long history behind it and has seen all the wonderful days of Indian Hunting. Must be highly priced as a collectors rifle.
In India lots of Maharajas & Ruling Chiefs , had very fine customized firearms by Boss &Co., James Purdey, Westley Richards, Hollands , John Rigbys & many more.

Monish, I am truly sorry I missed this thread when it was new! If I had found it then I would have canvased the Cabela's store's GUN ROOM specials to see if i could find the rifle for you and get some info for you to contact the owner. However, now that it is Sept 9th 2010 I doubt the info would be available for the new owner of such a treasure. Most collectors are a little cautious about offering too much info for security reasons.

Sorry I missed it, and I would love to tell you that I am the new owner, but alass, that rifle is out of my pay grade for sure!
DUGABOY1
DRSS Charter member
"If I die today I have had a life well spent, for I have been to see the elephant, and smelled the smoke of Africa" qt by Me 1982 (mac)
M

That's a very beautiful rifle indeed Monish.
I'm in love with doubles and I'm dreaming of owning an arsenal of them one day but I've have had quite a hard time in choosing which type (i mean sidelock or boxlock) will be the best for me. I've heard people saying that the boxlocks are much stronger (i don't know how) and the sidelocks are much more expensive and so on.
Could someone please explain the pros and cons of each type and any other important info on them?

That is an amazing firearm right there! Double rifles are works of art, truly the most beautiful rifles in the world. No rifle is more pretty than a double rifle imo.

Great to know , that you own this CLASSIC & Exquisite rifle , congratulations....

Oh, okay. Somehow I missed the 2nd set of barrels in the pic. Thanks.

Monish,
Duggaboy said,"I would love to tell you that I am the new owner, but alass, that rifle is out of my pay grade for sure!"

The current owner is still a mystery. But he's got fantastic good taste!

LOL, That is an understatement!

He's got a standing invitation to drop by anytime he wanders back up here again too. I'd love to hear some of his tales of the 'good old days'!

Yes I have lot of quiries about the few doubles that my family members & I own shall put forth to Dugaboy1 , some fine pieces by H&H & known British make in BP & cordite ...

Dugaboy1 is the most knowledgable person on double rifles that I have seen on the internet. He is a walking gold mine of info on double rifles. I have read his posts about double rifles on several forums and the amount of infromation he knows is amazing!

Damn my hat size just went up about three sizes with all the accolades! I'm not sure they were well placed however! There are many people on the internet who would disagree, I'm sure as I have been told by many, all my information is nothing more than opinion, and I'm sure much of it is just that.

Dugaboy, the accolades are deserved. There is no substitute for the experience you obviously possess on the topic of doubles.
There are many degrees of wounded . . . there is only one degree of dead

There was another gentleman posting at some of the D/R forums called '450/400' and he knew alot of the detail on the old British rifles also. But he stopped posting after a disagreeable sort thought he knew more..
`Tis a pity.

AkMike said:
There was another gentleman posting at some of the D/R forums called '450/400' and he knew alot of the detail on the old British rifles also. But he stopped posting after a disagreeable sort thought he knew more..
`Tis a pity.
Click to expand...


I think you might be thinking about 400 Nitro Express. If so, I agree that was a close friend of mine named Mark C. from Houston, Texas. He is an authority on the British double rifle, to a point that he has total recall when it comes to numbers, proofs and maker history. There was a guy from another website that came over for only one reason, to stir the crap with anything Mark had to say. These trolls are masters at the strawman type of attack, and love to succker folks into something they can twist. You know like the question " did you stop beating your wife?, yes or no! " No matter how you answer, Yes or No, or not answer at all, you look like a wife beater! That was a thread on two websites about OSR(Over Stressed Rifleing) A subject that has been known for many years, but is rare, and even rarer to exibit on film for proof of it's existance. I have seen examples of it, and so has Mark, but because we couldn't supply pictures showing it the assualt was on. Mark got fed up and left both websites for the most part. That is unfortunat because we lost the benefit of a real sourse of information on a mostly missunderstood subject, double rifles!

I simply do not understand folks who stalk one person relentlessly till on the Internet. Most of those types have a following that tags along to cheer the stalker on! It is amazing how docile these stalkers are when you are face to face with them, and they don't have their posse who suddenly doesn’t know them either without the keyboard between them and the victim.
DUGABOY1
DRSS Charter member
"If I die today I have had a life well spent, for I have been to see the elephant, and smelled the smoke of Africa" qt by Me 1982 (mac)
You must log in or register to reply here.