I'm just curious......is the .405 Winchester "enough gun" for hunting cape buffalo? I know it meets the caliber requirements (it's bigger than .375 diameter......but so is a .44 magnum, and I wouldn't use one of those on a cape buffalo), but does it have enough energy? My research shows a 3oo grain bullet (soft or full patch solid) at 2200 fps.
Enough gun, or would you use something else?
Thanks for your input.............
"If your dog thinks you're the greatest, don't go seeking a second opinion!"

However, for PG in the jess or thornbush or riverine forest, (what we call "woods hunting conditions" here in N. America), I suspect it would be one of the best.
Last edited: Mar 24, 2015

here is what was taught were the general rules for a DG cartridge:

The answer is YES! Many cape buff, water buff, bison, big bears, etc have been taken with the .405 WCF with the proper bullets. I have taken all those with my .405 and you should be able to find my 2012 cape buff post on this site.

On the non dangerous game I used 300 grain bullets and prefer the Northfork selection as they address all needs.
For the cape buff, I used 400 grain Woodleighs at 2080 fps (the regulation velocity for a friends 450-400 double) and it did the job nicely.
CRS, NRA Patron Member, DRSS, DWWC, TSRA, Whittington Center,
Android Ballistics App athttp://www.xplat.net/

Good shot placement?.??? Then yes use it!

+1 on good shot placement - period!
We were behind at a slight angle and PH said to shoot it between the front legs.
The 400 grain Woodie Weldcore entered just back of the rearmost rib and exited between the front legs, leaving a big hole through the heart. When the darn thing tried to walk off, a Woodie solid through the pelvis dropped it.
CRS, NRA Patron Member, DRSS, DWWC, TSRA, Whittington Center,
Android Ballistics App athttp://www.xplat.net/

It was also posted on Africa Hunting, but I could not locate it here.
Last edited by a moderator: Mar 25, 2015
CRS, NRA Patron Member, DRSS, DWWC, TSRA, Whittington Center,
Android Ballistics App athttp://www.xplat.net/

crs said:
The answer is YES! Many cape buff, water buff, bison, big bears, etc have been taken with the .405 WCF with the proper bullets. I have taken all those with my .405 and you should be able to find my 2012 cape buff post on this site.

On the non dangerous game I used 300 grain bullets and prefer the Northfork selection as they address all needs.
For the cape buff, I used 400 grain Woodleighs at 2080 fps (the regulation velocity for a friends 450-400 double) and it did the job nicely.
Click to expand...

Good information, thanks for posting it.
I am in agreement with you that a 400 grain bullet in this cartridge should put it into a different category.

If I had a .405, as long as the chamber pressure is safe, then I might be interested in trying 400 grainers in it.
Not sure my wimpy shoulder would appreciate it from a Model 95 lever action though (light overall weight rifle and a lot of drop in the stock shape) but I would try it, again if I had one, which I sadly do not.

The regular 300 grainers at about 2200 fps are pretty sporting in recoil but not brutal, from what I remember back when I had fired one.
I was thinking of that factory standard 300 gr load when I responded, "something else" to the OP's question, due simply to the low sectional density of a 300 grain bullet in .41 caliber.

On a DVD, I saw that the famous author Craig Boddington had Hornady load up some 400 grain solids for his daughter to use in her Ruger No1 single shot on a buffalo (Zimbabwe?)
And it worked well.
That ammunition is not sold to the general public though.
As you have done, handloading is the only way to get it.
However, for my safari dollar, if I wanted to bring an approximately .40 caliber Ruger single shot for buffalo, I would just get their .450/400 caliber in the first place.

I would say yes. I bought a Ruger #1 Specifically for that purpose and got some Barnes 300 gr TSXs going pretty good and pretty accurate. However, since I have a few more years to digest things, I have moved on to a 416 Rigby. Just because I already have an original Winchester Deluxe TD Model 1895 in .405 Winchester. 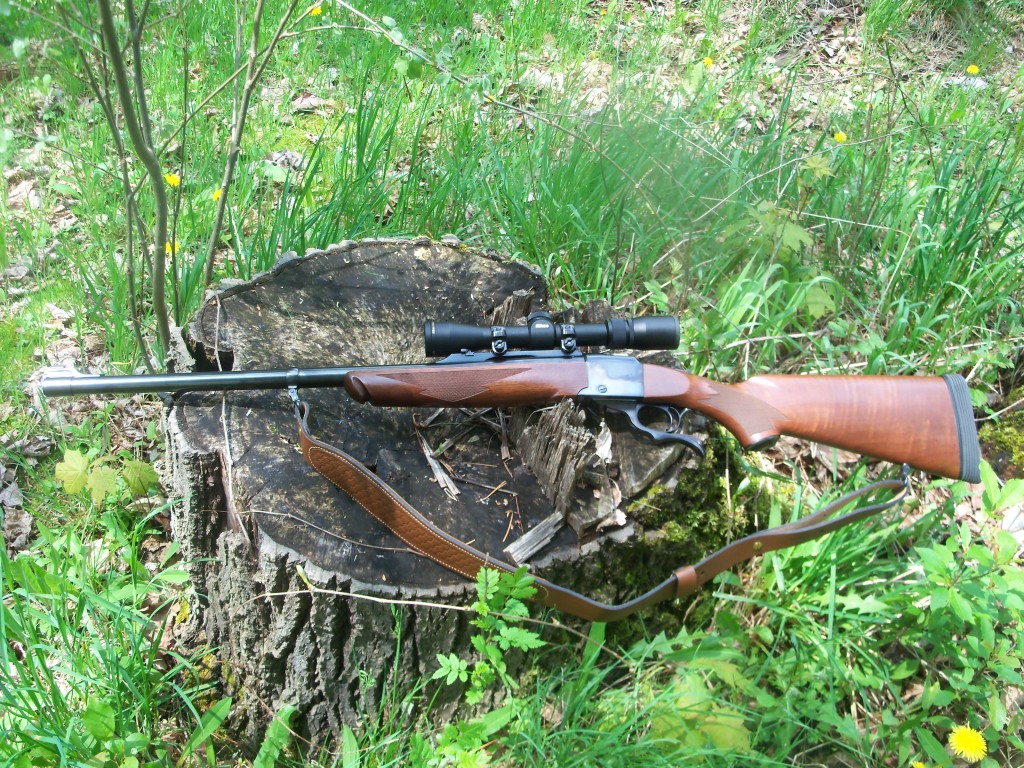 The target and load for the Ruger #1 (DO NOT USE IN WINCHESTER OR MIROKU 95!): 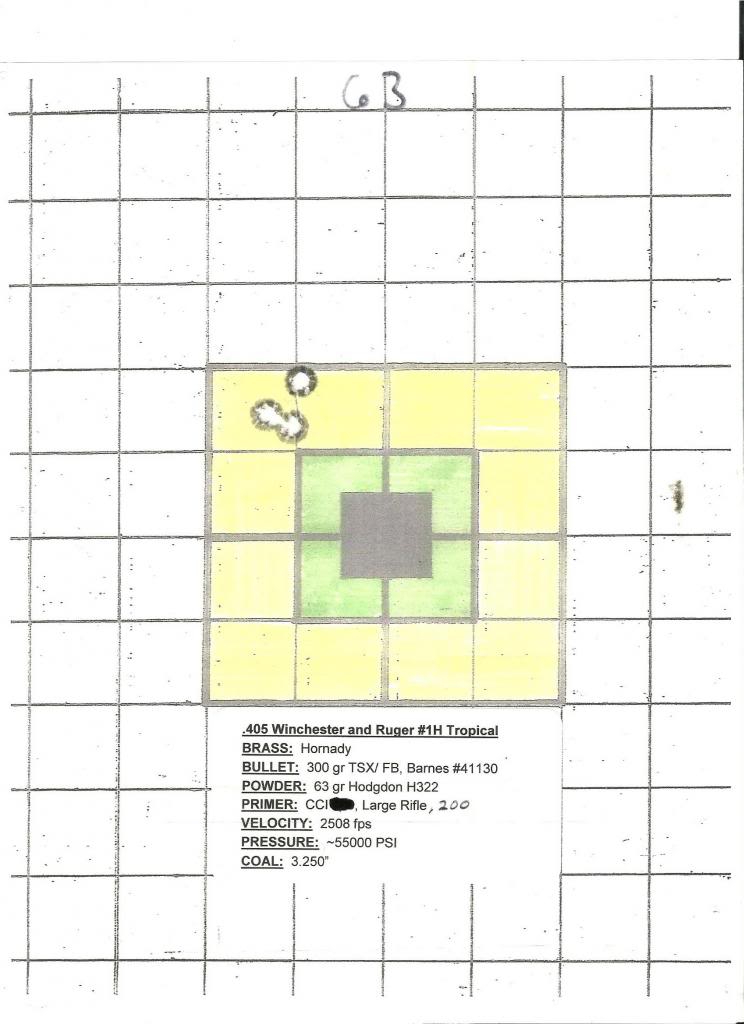 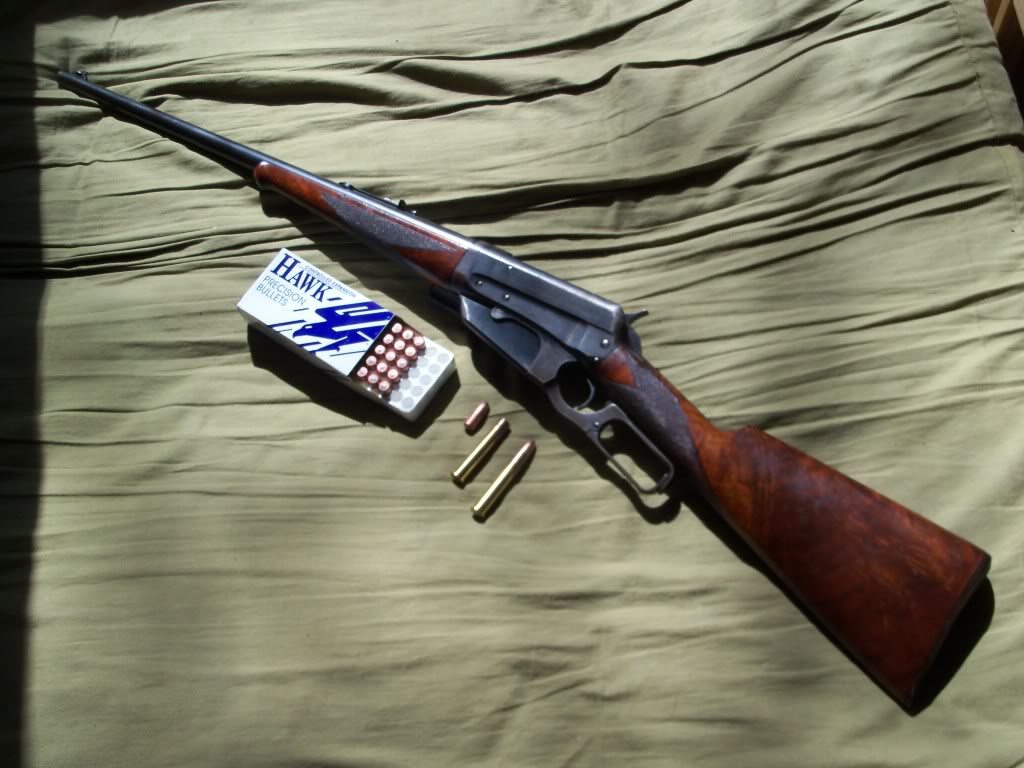 Your Model 95 is a museum piece (no doubt you already knew that) and I am truly impressed.

Your Model 95 is a museum piece (no doubt you already knew that) and I am truly impressed.

No kidding...absolutely gorgeous! I have a semi-custom reproduction 1895 in .405 but yours give me the sweats!
Rob Olive - Author of Essential Liberty...Fiction that seems all too real
Find out more at http://www.roboliveauthor.com/

I agree with Velo Dog.Nicholas, your Wincester mod. 1895 in 405 is a beautiful piece of history.
Witold
S

Steve,
I agree with you on the proven effectiveness of the 41 caliber 400 grain bullet at 2100 fps on large and dangerous game.
However, I would be remiss not to explain that in my Miroku made Winchester 1895 .405, I achieved 2080 fps without exceeding 50,000 psi. I was prepared to go a little higher, but when the regulation velocity of the 450-400 double of a friend was reached with a very low standard deviation, he suggested that higher velocity was not needed. He was right.
I have located a powder that will reach the desired velocity with lower pressure and will experiment with it when I expend my supply of loaded 400 grain Woodie softs and solids. That may be a while because 300 grain bullets do a fine job on most critters such as this little porker taken yesterday at the Boars Nest in Oklahoma: 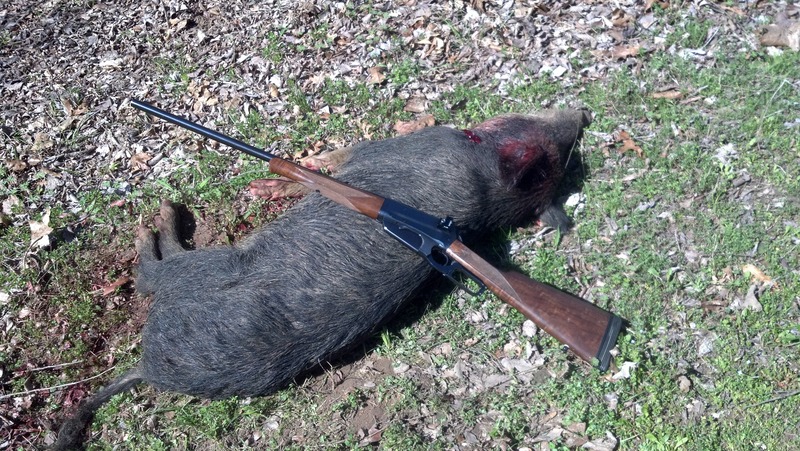 This thread has really made me want to get a model 1895 in 405 win. Why wouldnt this caliber work for buffalo if you where using the 360gr northfork.
Amon458

Amon,
The .405 WCF has taken many such critters with 300 grain bullets. With modern premium bullets, my .405 has taken two water buffalo, a two bison, a Nilgai and numerous other exotics, deer, pronghorn and hogs; all with 300 grain bullets. For the big stuff, I prefer Northfork CPS and FPS, at 2250 fps that shoot to the same point of aim as the Hornady factory 300 grain bullets. The Barnes bullets are fine also. Some of my 1895 .405 lever gun friends have loaded 300 grain bullets up to 2350-2400 fps just for the fun of it, but I have not done so.
I always wanted a .405 WCF in a double because it is so easy to equal the performance of the 450-400, but so far, no bueno. So much to do, so little time.
CRS, NRA Patron Member, DRSS, DWWC, TSRA, Whittington Center,
Android Ballistics App athttp://www.xplat.net/

I have a nice original Deluxe Winchester 95 .405 WCF with a shotgun buttstock and the express sights I plan on using on a water buffalo hunt. I plan to use a Woodleigh .416 projectile swaged down to fit the actual groove diameter (.4135") and Rx17. Should give me good performance at reasonable pressures for the old girl.
To the hunt!

CRS I hope you find a double at some point, I love mine. Have worked up several nice regulation loads with 300gr woodleigh and hornadays. Plicked up some hawk 350gr that I plan on working with over the winter. Hope you use my 405 on a Lion at some point.

AZdave
What make .405 double do you have?

fsrmg1 -
I found that for 400 grain bullets, the .411 Woodleigh bullets worked best in my Miroku 1895 .405.
I use the 300 grain .411 North Fork bullets also with good results.
CRS, NRA Patron Member, DRSS, DWWC, TSRA, Whittington Center,
Android Ballistics App athttp://www.xplat.net/
You must log in or register to reply here.

Zeroing solids and soft points together
2