404 Jeffery LH build on a budget

New member to this forum (though I've been browsing on and off for a few years), and new to the 404 Jeffery as well. I have recently had a rifle rebarreled to this venerable calibre, but I have yet to fire it for the first time.

Actually, I've only fired 3 rounds of 404J ever in my life, in an old Westley Richards rifle with a rather stout Silvers pad on. The cartridge was the Norma PH 450gr, so it was not really a plinking round Pulling the trigger, the feeling was similar to taking a too large gulp of whisky, or sitting yourself down on a too hot bench in a sauna, i.e. an abrupt wake-up (what the h*ll just happened?), followed by a burning sensation that receeded rather quickly, leaving a warm glow in the shoulder. It was definitely easy to tell difference between a misfire and the real thing.

So after reading up here and elsewhere, I decided to go forward with getting my own rifle. As I am of the left-handed persuasion, it was rather hard to find a 98 action (or a derivative) that cost less than a small car, so I had to make do with what was (in my opinion) a good alternative. All my other rifles are Sakos (6.5x55, 30-06 and 9.3x62), and it seemed wise to stay with the same action to have the same feeling for how the gun works. Also, the Sako long action comfortably handles the cartridge length. Therefore I bought another Sako AV in 6.5x55 and sent it to the gunsmith. I also managed to find a second-hand barrel so I didn't have to wait months for it being delivered from the manufacturer.

Now the barrel has been screwed in (a blued gloss 26-inch Lothar Walther with what I was told is an H&H profile(?) - basically a slow taper down to .65 in at the muzzle. The action was adapted to facilitate feeding and a 'new' wider magazine box was fabricated from something the smith had lying around. Also an extra recoil lug is mounted under the barrel, a couple of inches out from the action, and the system has been bedded. Banded sling swivel, front and rear sights.

The stock is still the same old Sako 'Hunter' Monte Carlo stock in without any figure or charisma, and I think I'll swap that out for a custom stock in the future. I did put on a Pachmayr Old English pad (red), but even without having fired it, I believe that it may bee too soft.

So far the cost of the build has been around $2000, with probably another $1000-$1500 coming for a new stock. But then I also got a spare barrel in 6.5x55 in bargain. Altogether, I consider this rather ok for a custom made rifle.

I'll let this serve as my introduction, and I'll probably come back with questions regarding 404-related matters in the future.

How about posting a picture of your rifle? I for one would like to see it. Speaking about 6,5 x 55 caliber rifles, that is probably my favorite. I own over a dozen Swedish Mausers, most of them have been sporterized, some with new wood stocks others with fiberglass stocks. I load my own ammo for the Swedes as well, so I get a lot more out of it than what factory ammo offers.

If possible you might try using some 400 Gr. ammo instead of the 450. Although you will still know that you've fired a large bore it is not all that uncomfortable.
C

I'll try to get some pictures up sometime soon. And the guy who sold me the barrel also sold me reloading dies, brass and some DGX 400's (along with some Norma MRP-2 powder). Since the DGX has had some questionable reputation, I did also purchase some A-Frames in 400gr, and Woddies in 400 and 450 as well. So the DGX will be used for paper targets.

I might get into casting my own bullets in the 300-350gr area if I can figure out where to get all the things needed. So far I have not gotten into casting anything yet, and I don't have any of the equipement.

And yes, the 6.5x55 is a rather nice one. Very effective for its size. Probably around a third of all moose shot in Sweden are killed using this calibre. I've only used it on deer so far.

There is no doubt that a .40 cal is not a plinking caliber.
Good luck with your new firearm.

Use the DGX for practice and the Swift A Frames for hunting. I'm not familiar with Norma MRP2 powder. My load is supposed to be around 2300 FPS and it grouped very well. There are lots of guys on AH that use the 404 Jeffery. You might consider going over some of the older posts to see what their ammo preferences were.
C

Here are some images (if I get it right)
Also with my other Sako in 6.5x55, to show what it looked like originally.

Different size heads on the recoil bolts, I know. 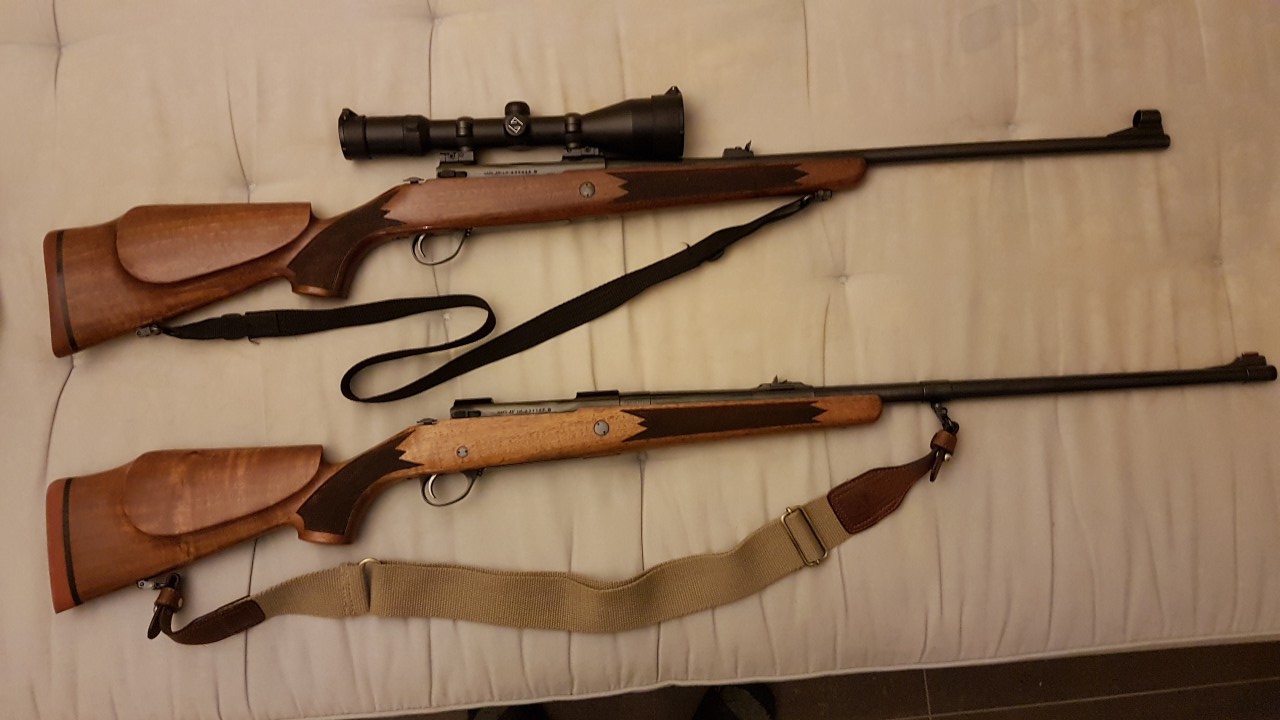 Comparison with one of my other Sakos to show what it looked like before. 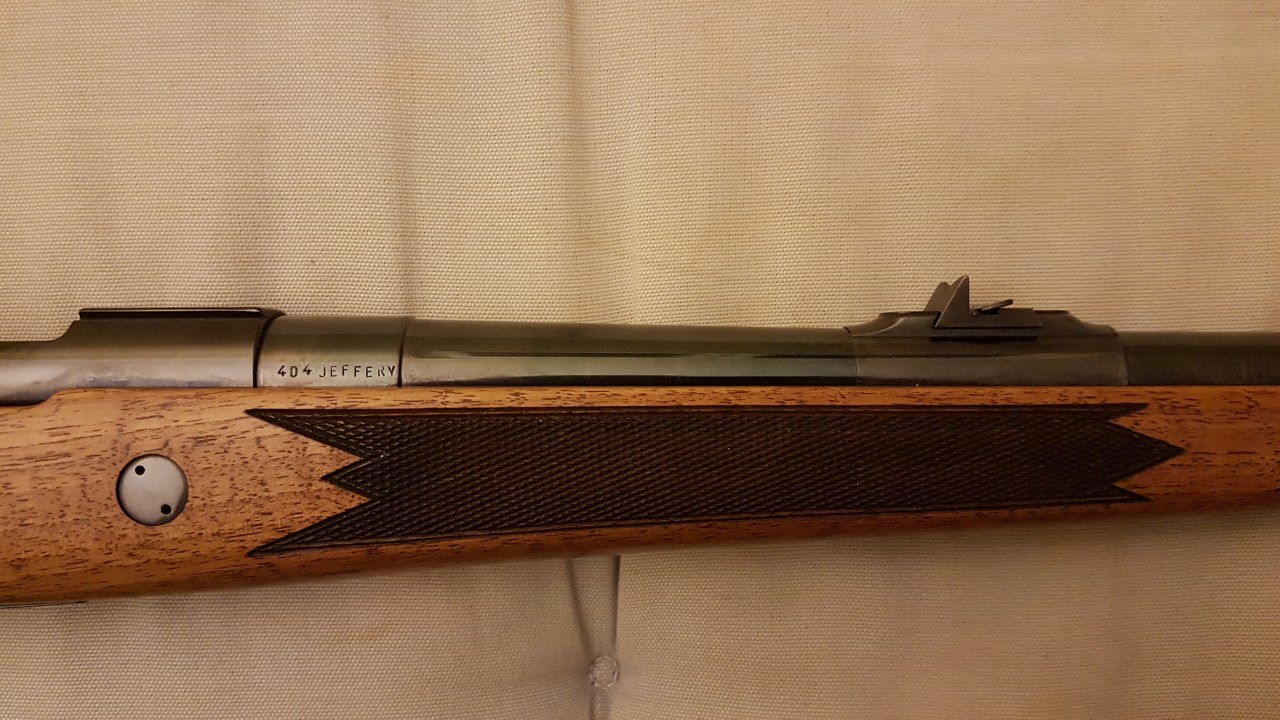 Barrel profile. Not super-even bluing. Previous owner seems to have been too generous with the stock oil in the checkering.. 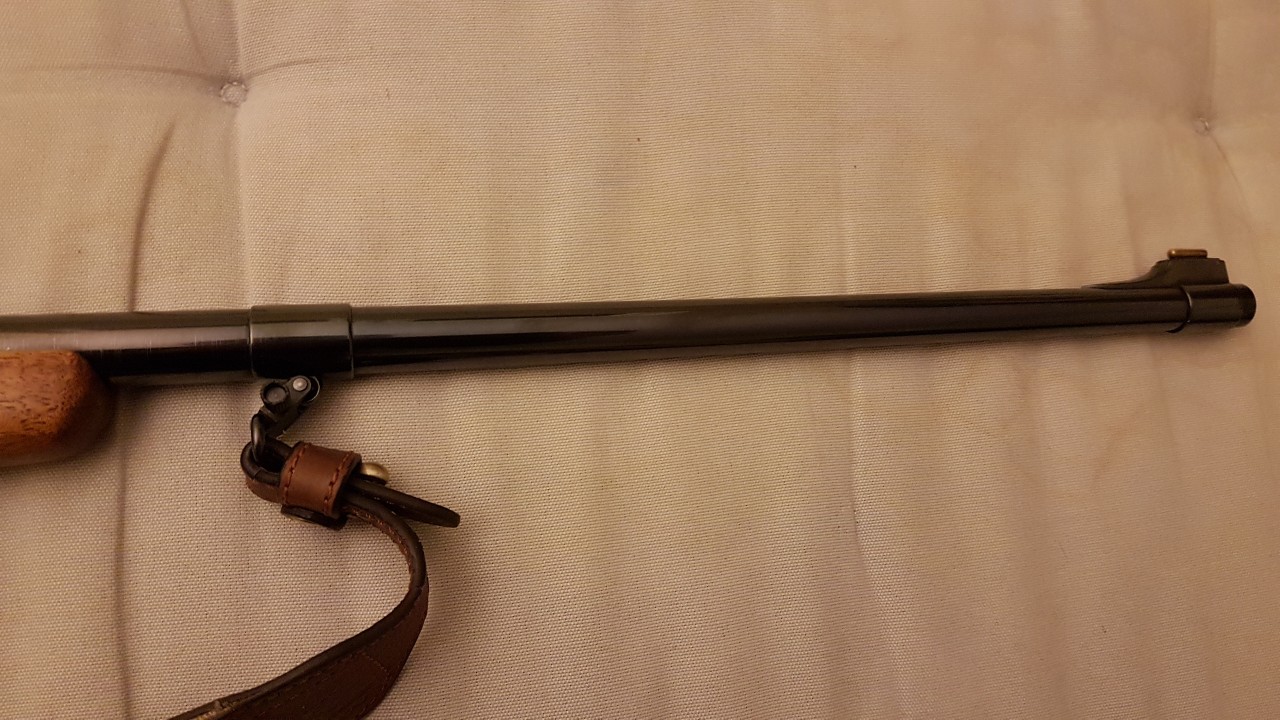 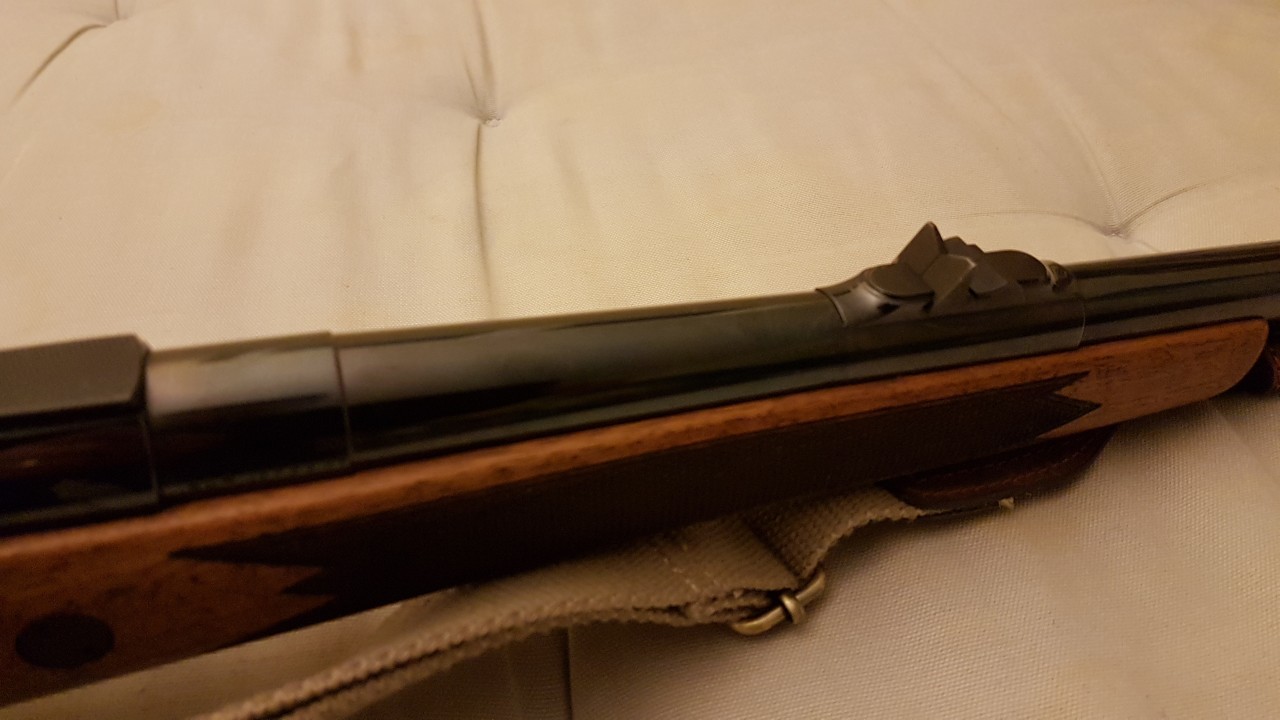 Flip-up blade not filed yet.

Overall, I kind of like the proportions of the gun with a longer barrel. If I get a new stock, the fore-end will probably be an inch shorter, but not much more.

Welcome to the .404 Jeffery family. I use the 400gr Woodleigh soft in mine (but only on targets so far) loaded to 2300 fps. I also have some cast 350gr downloaded rounds that came with the rifle, great for practice, but I only have 6 left.
I must take mine out after deer sometime this year.
R

With the new barrel the balance is probably off. If it is barrel heavy, you can add some tungsten to butt-stock for balance and recoil reduction.

Rick Hill said:
With the new barrel the balance is probably off. If it is barrel heavy, you can add some tungsten to butt-stock for balance and recoil reduction.

Well, the new barrel is certainly heavier than the previous one... but it doesn't feel all that bad really. If/when there is a new stock made, it may get a slightly shorter in the fore-end. And perhaps with denser wood, thus moving weight rearwards a little.
R

With iron sights and fully loaded (3+1) it comes in at 9.3 lbs with the current stock. A sling and light scope will add even more weight.

Sakos are nice looking rifles. I like the contrast in the checkered areas. I own two old wood stocked Sako 30-06s and a couple of newer models with fiberglass stocks a 300 Win Mag and a 270. All of them shoot. As mentioned previously a 400 Gr. bullet at 2300 FPS has proven to be very accurate yet tolerable from a recoil standpoint. The 404 Jeffery in my opinion is not a "long range" caliber. I am putting a Nikon 1.5 -4x on mine with steel QD Rings & mounts. That set-up will provide more than ample magnification for the larger animals it is intended for, out to my self imposed 150 yard limit.

The .40's + calibers are some of the best! Welcome to the club! They aren't plinking rounds but they are wayyy more versatile than most people would have you believe, gun writers included. I took a black bear with mine this year and 340 grain woodleigh. It seemed to work! As to the dark checkering, it looks as though sako seals their checkering with stain, not oil. I have rifles that I have checkered myself with 6 coats of tung oil in the checkering and it hasn't darkened it any. It is also possible that it looks darker because the walnut is so lightly colored. Have fun with that rifle! you should try it out on moose up there in Sweden!
"I am not a good shot, but I shoot often" - Theodore Roosevelt
C

Yup, I too like Sako quite a lot. Even though it's push-feed. I think it will work fine.

Just to keep it tidy, I continued the build process in a different thread.

Nice looking rifle love mine on Winchester action 10lbs and use 400tsx at 2300fps
Manageable even from prone no problems.
Rodney A McCartney
You must log in or register to reply here.

What to look for in a Mauser 404 jeffery