I just got back from a range session this morning, taking advantage of the cloudy, 82 F temps which rate as a cold snap for August in Louisiana. As the title to this thread states, I was testing some 300 Win Mag loads with Alliant 4000-MR and Hornady 200 gr ELD-X bullets.

Why this combination? Let me explain:

300 Win Mag: I don't own a rifle in this caliber, but I have two sons-in-law that do. One has a Ruger M77 MkII with a 24 inch barrel and the other has a Browning A-Bolt with a 26 inch barrel. Both are left handed actions. A few months ago, @Manny R posted a for sale note for a bunch of once fired 300 WM brass, so I jumped on that deal.

Alliant 4000-MR powder: @tarbe made some people happy by selling some of his powder inventory earlier this year at pre-crazy prices. I bought an eight pound jug of this stuff, as it looked like a powder that would work on 7mm mag, 300 WM and 338 WM. There isn't much info available on this powder, but Alliant had this on their webiste:

Federal 215 Magnum primers
I have a bunch of these in inventory, but I am embarrassed to say what I paid for them during the past year or so.

Hornady 200 gr ELD-X bullets
I finally found some of these on GB a few weeks ago. Got 4 boxes of 100 for pre-crazy prices. This bullet has a high temp resistant plastic tip and a sleek boat tail design, giving it a very high BC of 0.597. Also lots of good real world reports. I sort of view the ELD-X and an improved SST, another bullet which I have used to take quite a few critters. 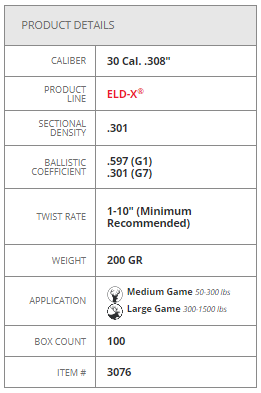 Given the Alliant recipe info, I decided to load 69 to 72 grains in one grain intervals. Loaded 5 rounds each, so 25 round total. Since the 200 gr ELD-X is a fairly long bullet, I seated the bullet as max COAL of 3.340 inches and put a slight crimp on it with a Lee factory crimp die. 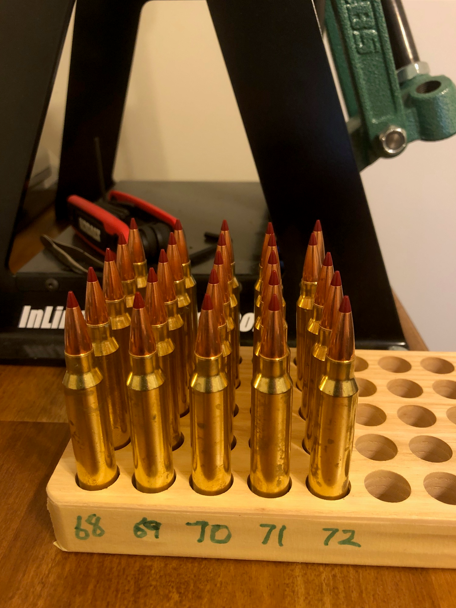 Velocity is from a Magneto Speed. These are the results:

Any comments or observations are welcome.

So you shot these groups through a left handed rifle? You just finished saying that you don't own a rifle and then we've got data. My curiosity demands that you fill in this void. Please.
I am looking to buy a .375 H&H Lee Loader Kit please let me know if you a line on one.

@Forrest Halley, yes I used the left handed Browning A Bolt with the 26 inch barrel. I am actually left handed, but right eye dominate so I have shot right handed all my life. I shot these rounds today, right handed from a Lead Sled

Like you, I think I'd be more inclined to the 72 Gr. load. Velocity is approx. 150 FPS faster across the board. Ft. Lbs. of energy and penetration will be better as well.

I think the better load is the 69 grain running 2,856 fps. It just seems ideal for a 200 grain non bonded bullet. Easier on the rifle, brass and shooter as well.
GA Hunter 2/2/2019: "....tell your outfitter and PH that a big kudu would mean a lot. Then go enjoy yourself and take what the bush offers."
You must log in or register to reply here.