The 120-grain Norma Kalahari bullet zips from a .270 at 3,280 fps. It’s perfect for deer, pronghorns.
A fair-haired boy as cartridges go, the .270 Winchester has charmed hunters since its 1925 birth. First chambered in the company’s Model 54 bolt rifle, it drove a 130-grain bullet 3,140 fps. At 300 yards, far beyond normal game-killing ranges of the day, that missile still clocked 2,320 – faster than a .30-30’s at the muzzle! But Depression-era bullets behaved erratically at high impact speeds. For hunters whining about meat damage, Winchester added a 150-grain load throttled to 2,675 fps. Nobody bought it. The .270 remains a race-horse; 150-grain bullets, now stronger, are loaded to over 2,850 fps, for the flat flight and hard hits at distance hunters expect. Extra-tough bullets, like Norma’s Oryx, combine a broad mushroom with high weight retention and deep penetration across a wide range of impact speeds. 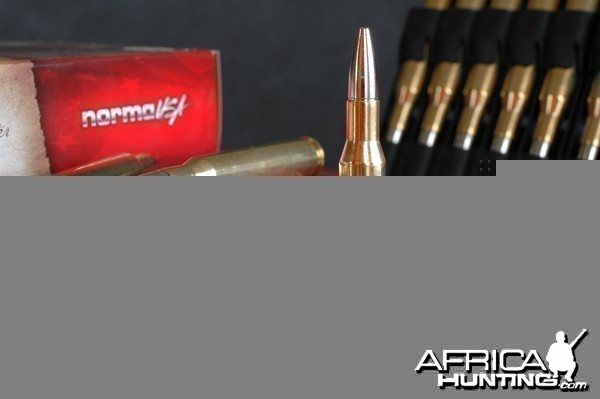 You can make .270 cases by necking down .30-06s – though factory-fresh .270s are a tad longer. Case capacity averages 63 grains of water. Norma .270 brass is commonly considered some of the most uniform. The .270 generates pressures in excess of 52,000 psi; high-quality brass also treats handloaders with long case life. Handloading the .270 can be as easy as carding off a charge of H-4831 at the mouth, then seating a 130-grain bullet – albeit you’re smart to weigh even the slowest powders.

Winchester’s choice of a .277 bullet over a .284 still seems odd. The .277 diameter was shared by no other commercial cartridge at that time. The .284 or 7mm had earned a following since the 1892 debut of the 7x57. Other 7mms followed in Europe. Still others were mid-wifed by wildcatters in the U.S. after the .300 H&H Magnum arrived, also in 1925. Perhaps Winchester wanted a truly distinctive round. The 7x64, circa 1917, was similar; a 7mm bullet would have given Winchester a frisky 7x64 or what we know as the .280 Remington (introduced 1957). Then again, the Great War was fresh in memory. The 7x57 had come from Germany, our recent foe. America’s most celebrated rifle-maker may have decided to market a uniquely American cartridge.

Gun writer Jack O’Connor used the bully pulpit of Outdoor Life to praise the .270. With it he shot “everything from javelina to Alaska-Yukon moose.” He reported firing 10,000 .270 rounds in tests in one year. While the .270 would no doubt have succeeded without O’Connor’s blessing, he gave it a boost. So did Winchester’s Model 70 rifle…. By 1931 Winchester was in receivership, a victim of the Depression. In December it was acquired by Western Cartridge Company, which committed to improving the Model 54. The Model 70 appeared in 1937 and drew raves. Subsequently, only the .30-06 in a long list of charter chamberings proved more popular than the .270. Not only O’Connor, but sages like Townsend Whelen favored this round. Though many elk hunters have fallen under horsepower’s spell, others still appreciate the .270’s modest recoil. In surveys I conducted in the 1990s, the .270 ranked third in popularity in elk camps, behind the ’06 and 7mm Remington Magnum. In my experience, a .270 with proper bullets is all you need. One bull, quartering off, tumbled like a shot hare when I landed a 150-grain Nosler Partition. A very big six-point I’d hunted with a client reared like a horse when struck by his 130-grain softnose, then fell backward, planting its antlers in the earth, to lie still as a stone.

In general, I’ve found riflemen with .270s better marksmen than those with thunderous magnums that crack clavicles and dislodge molars. A fellow who culled elk for Colorado’s wildlife agency used his .270 because it enabled him to keep shooting without a flinch. 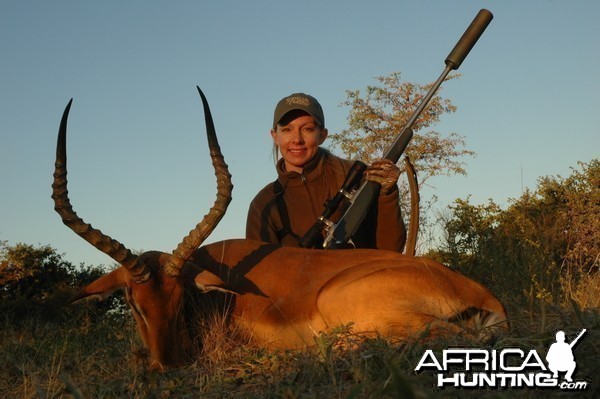 270 Winchester
A popular, versatile big game round, the .270 also recoils gently. That “can” is a sound suppressor.

While most .270s are bolt guns, Remington and Browning have cataloged autoloaders, Ruger and Browning dropping-block single-shots. Remington’s slide-action 760 series and Browning’s lever-action BLR have also chambered the .270. So too many rifles manufactured in Europe. Most .270 barrels have a rifling pitch of 1-in-10, though Sweden’s Husqvarna chose 1-in-91Ž2. Mannicher-Schoenauers were rifled 1-in-9. Many .270 rifles these days have 22-inch barrels, as did O’Connor’s famous Biesen-stocked M70 Featherweights. You’ll get more speed from 24 inches, standard for early Winchester M70 barrels. Among the many fine factory loads for the .270, Norma’s USA line boasts a couple of the best. A 120-grain hollowpoint blitzes coyotes, whitetails and pronghorns. The 150-grain Oryx is ideal for African plains game as well as mule deer and elk. It hits hard but recoils courteously, even in lightweight rifles.