Sounds like the majority of answers gravitate towards the 257 roberts. There are certainly broad pros/cons to both. Other pros/cons is based upon luck of the draw with your individual rifle.

Thank you, this gives me a lot to think about.
WOOOOOO!!!

Late to the party here, but its the Roberts for me as well. Currently own a Ruger K1A No. 1 thus, great shooter. I did take a Montana antelope some years back with a Remington 700 Classic Roberts. Dropped it with one shot at approaching 300 yards with a 115gr Nosler Ballistic Tip with a good handload. The .25-06 just never intrigued me like the Roberts does.

curtism1234 said:
Sounds like the majority of answers gravitate towards the 257 roberts. There are certainly broad pros/cons to both. Other pros/cons is based upon luck of the draw with your individual rifle.

Thank you, this gives me a lot to think about.
Click to expand...

Curtism1234
My preference is for the roberts but I am a mad bastard and decided to design my own using the 25 Harrison from Australia, the 25 epps from canada, the full lenght 25 krag from the US and throw in ,Newton modification.
Its a 303 case necked down to 25 cal, the shoulder has been moved forward to shorten the neck from .311 to .257 ( newton mod), absolute minimum case taper and a 35 degree shoulder.
Sounds like a lot of mucking around but its not. Just thre quarter neck size a 303 case to 25, use a Roberts starting load and bang. One perfectly formed case. 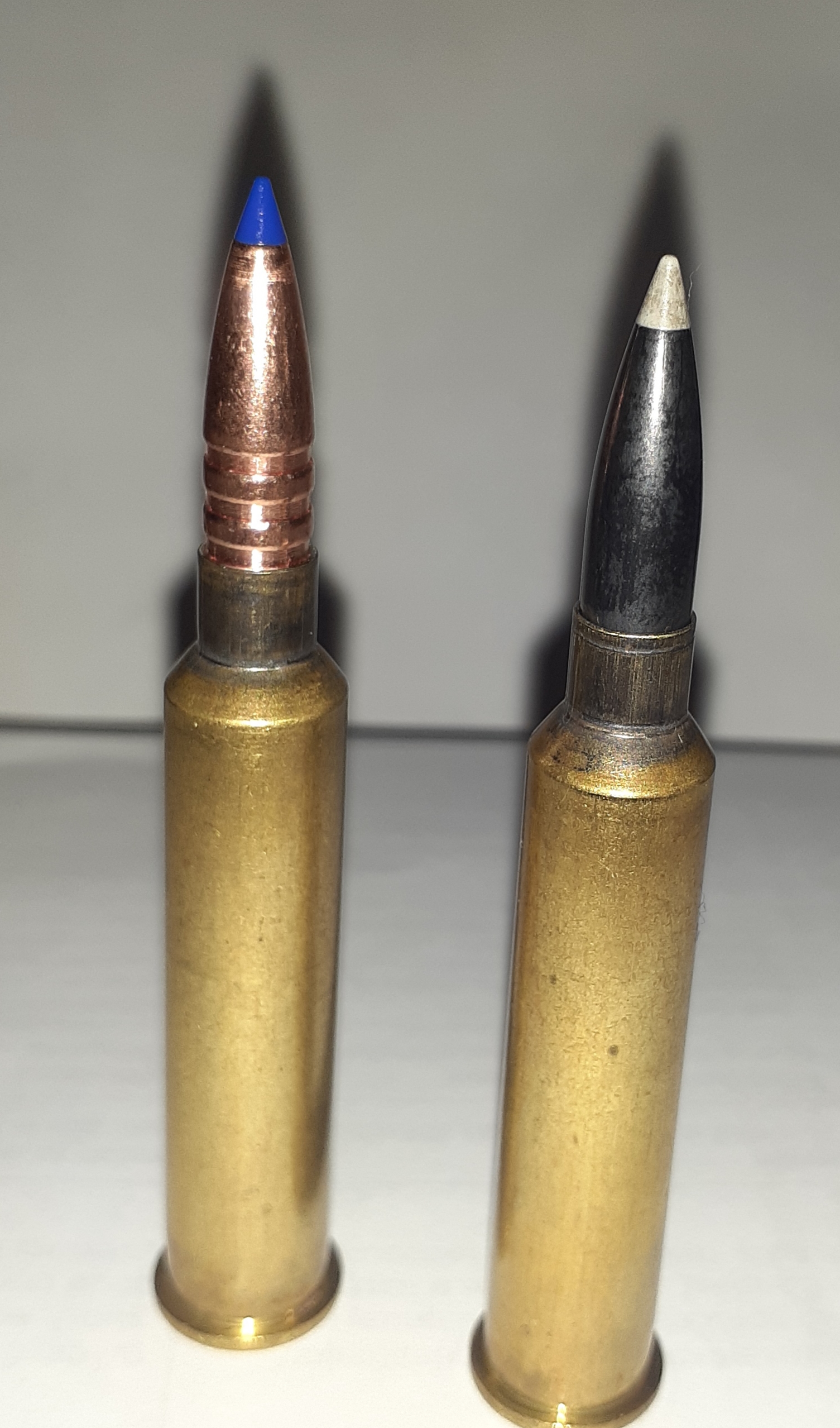 Loaded with Hogdon superformance the 100grain Barnes ttsx gives 3,670 fps and the 115grn nosler combined technology silver tip or the 117 SSTs give 3,340 fps.
This is out of a 24 inch barrel. Accuracy is outstanding and the cases shown are on their 7th reload. 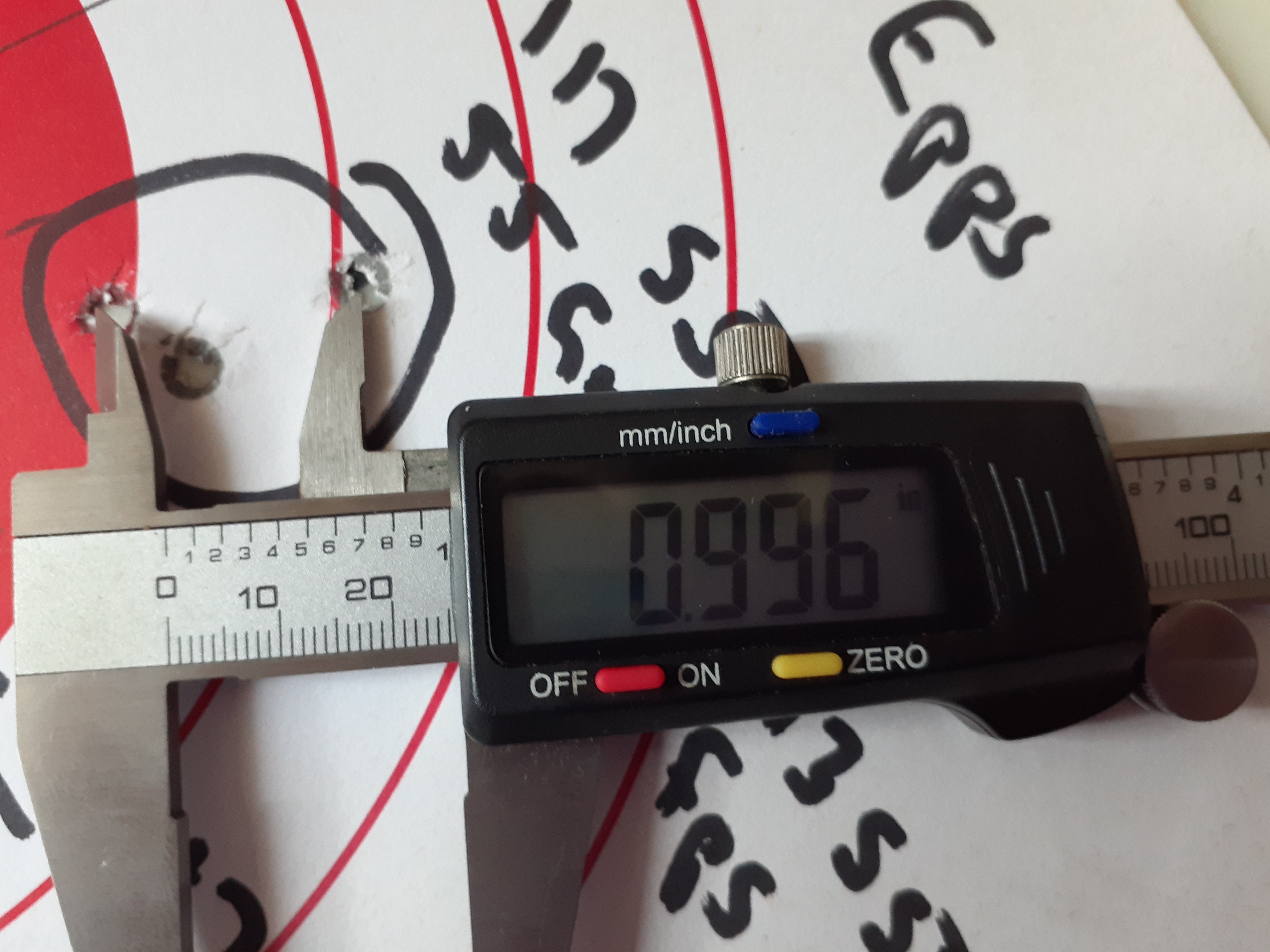 Sess
Get horribly close with the 80gn TTSX don't know about the 75grain VMax. I'll just stick with the 100s and up they work well.
Bob
R

I loaded up a 257 Wby with a 60 gr Hornady bullet designed for the 25/20 and fired it over a Chrony. It read 4505 fps at 15 ft from the muzzle. there was a target at 100 yards however the bullet didn't make it to the target, having turned into a grey cloud a short distance after the Chrony.
R

Your 23/303Imp looks like a scaled up model of this, a 22/30WCF Ackley Improved. Sorry about the focus, the rim is nice and clear.

Your 23/303Imp looks like a scaled up model of this, a 22/30WCF Ackley Improved. Sorry about the focus, the rim is nice and clear.
Click to expand...

Ray B
A bit mate but my neck is shorter and it holds halftime a bucket more powder. Mine will hold 65 grains of superformance to the base of the neck, but that would be a big big overload. 58grains with the 100 gn ttsx max safe working load.
The 22/30WCF definitely looks interesting would give the swift a run for its money. Be beautiful on a Browning 85 hiwall copy.
Bob
R

I shoot a 25-06 from a 03-a3 action,26in douglas supream barrel,load 75 gr sierra hollo points for peditors and prairie dogs and 100gr ttsx for deer ant, and elk it is my fav gun in the safe its weight is 10.8#without tri pod so I don't pack it far but recoil is like a 22.It is a treat to shoot
R

The 25-06 is more powderful, shoots a bit flatter, is normally more accurate, but that's most of the time, not always...recoil between the two is about the same. both are great calibers, but anyway you cut it if you intend to shoot anything bigger than deer or shoot long range the 25-06 is your best option, its as simple as that..My personal choice is the 30-06 I never found anything it won't do..
S

In Africa only the .25-06 got a foothold and is one of the specialist calibers for hunting the Karoo and Kalahari. I judge this by the fact that even PMP make a load or two for it and it is available in my local shops.
I think the 257 Roberts will be a better all rounder as it sheds a bit of the meat blasting velocity for closer in work but its still not an ideal bushveld caliber as you are limited to 120gr max bullet weight.

You will have no issue travelling with ammo marked anything as long as it works in your rifle.

flatwater bill said:
I have owned two 257 Robts and two 25-06's. I had problems with both Roberts, and this is rarely discussed, even in the good articles, like the one noted by Chuck Hawks. The Roberts that I owned, like most, were on the same action length as the 25-06. One of them had no magazine block, and cartridges often tipped in the magazine, or worked their way forward in the mag. Cartridges usually feed best when the case head is pushed back in the magazine, and so it was with this rifle.....not feeding well at times. The Win 70, also on an 06 length action, had a magazine block so short that even 100 grain bullets required such deep seating that accuracy was effected. I solved my problem by getting a short action 250 Savage, and a Ruger 77 in 25-06. I have no specific knowledge of the Kimber 257 Roberts. I know it is sacrilege.... but I could not appreciate the difference between any of them in the field.......FWB
Click to expand...

@flatwater bill.
I like long magazines. Seat the bullet out further. Long throat the chamber, seat the projectiles out further and load more powder and make maximum use of case capacity. Long mags can be cured by gluing a couple of Teflon strips near the case shoulder. Stops them moving forward.
Bob

@Ray B
Do you still have the article.
If you do could you PM me please sounds very interesting. In Australia at one time we had the full length 303 British necked down to .224 and a shorter versions called the 22 wasp and 22 sprinter. The latter being a creation of Heck Bridgeman of sprinter arms here in OZ.
Bob
You must log in or register to reply here.