.224 viability as more than just a vermin cartridge

First, I know this has been discussed to death, I'm sorry to do this to all in question.

Been reading up about the swift scirocco and speer gold dot 75gr projectiles and I like what I see, but I'm honestly not an expert on these things and I need advice.

I would like it to be used on everything smaller than blesbok at close (25m) to medium ranges (250m). Sort of like the little cousin to the 308.

Usually I would look at a 243, but even when loaded heavy that bullet is motering and I've seen what it can do to duiker and springbok at close range.

The crux of the matter is: Do those of you in the know think it would be able to deal with blesbok & springbok at 250m and pigs & duiker at close range with out obliterating the latter?

Well aware that it's a pretty steep ask, but there it is.

Heck yes. In a 22-250 they would be most excellent.
Life is not a journey to the grave with the intention of arriving safely in a well preserved body, but rather to skid in broadside, thoroughly used up, totally worn out, and loudly proclaiming, “Wow what a ride!“

With the 75 gr bullet it will work. However, I would not call it "ideal" on very much. On the little guys, even a 75gr bullet can be explosive - particularly at the range at which a duiker, civet, or suni typically presents itself. Though some use them on feral hogs here in the States (I don't - my pig sticking starts with a .270 or 7mm), I wouldn't use it on one with a trophy fee attached. If your rifle is accurate, it would be fine for braining culls.
"We sleep soundly in our beds because rough men stand ready in the night to visit violence on those who would do us harm" American Novelist - W. Churchill

See, you've summed up my worries. The only hope I have is that the scirocco and gold dot (lrx too) are pretty well built and I'm wondering if that'll equate to a lack of explosive expansion.

No trophy fees thankfully- an RSA local, whatever that's worth. I'd run a 6x45, but I have no desire to lug around a FA that I can't but ammo for if it's needed...
I

Many farmers will not allow the use of a 5.56mm caliber for hunting. Up to Springbuck you are legal.

Many farmers will not allow the use of a 5.56mm caliber for hunting. Up to Springbuck you are legal.
Click to expand...

Thanks for the concern, well aware of the legislation, it's the reason I never bought a 6.5 swede... But thank you, really appreciate the information and concern. Not looking to use it for "hunting" but for culling. If I'm hunting properly, a 375 is the main choice. If I remember correctly, legislation also makes allowances/exceptions for high-fenced farms? But there is a reason that I specifically didn't state it as a hunting rifle

Or so I´ve heard

In Scotland, it is legal to use a .22 Centre fire for roe deer and quiet commonly done so. These get upto about 25kg in weight. Also in England we can use .22CF on muntjac and Chinese Water Deer.

I personally use a .223 Rem for the smaller species

Ammo preference is a usually a relatively heavy soft point though quite a few use 55gr soft points.

Factory my rifle likes 62gr Federal Fusion
Have loaded up some 65gr Sierra Gameking SBT (Looks promising, need to tune the length a bit more)
Also have some 60gr Nosler Partitions I want to try

As another data point, Ireland used to have very tough laws on firearms ownership with .22-250 pretty much being the biggest thing you could have so deer stalkers over there shot Red deer and Sika with .22-250s... Worked but would not be my first choice.

NB With the .22 Centre Fires, make sure your twist will be fast enough for the bullet you want to shoot.

This is my light deer set up 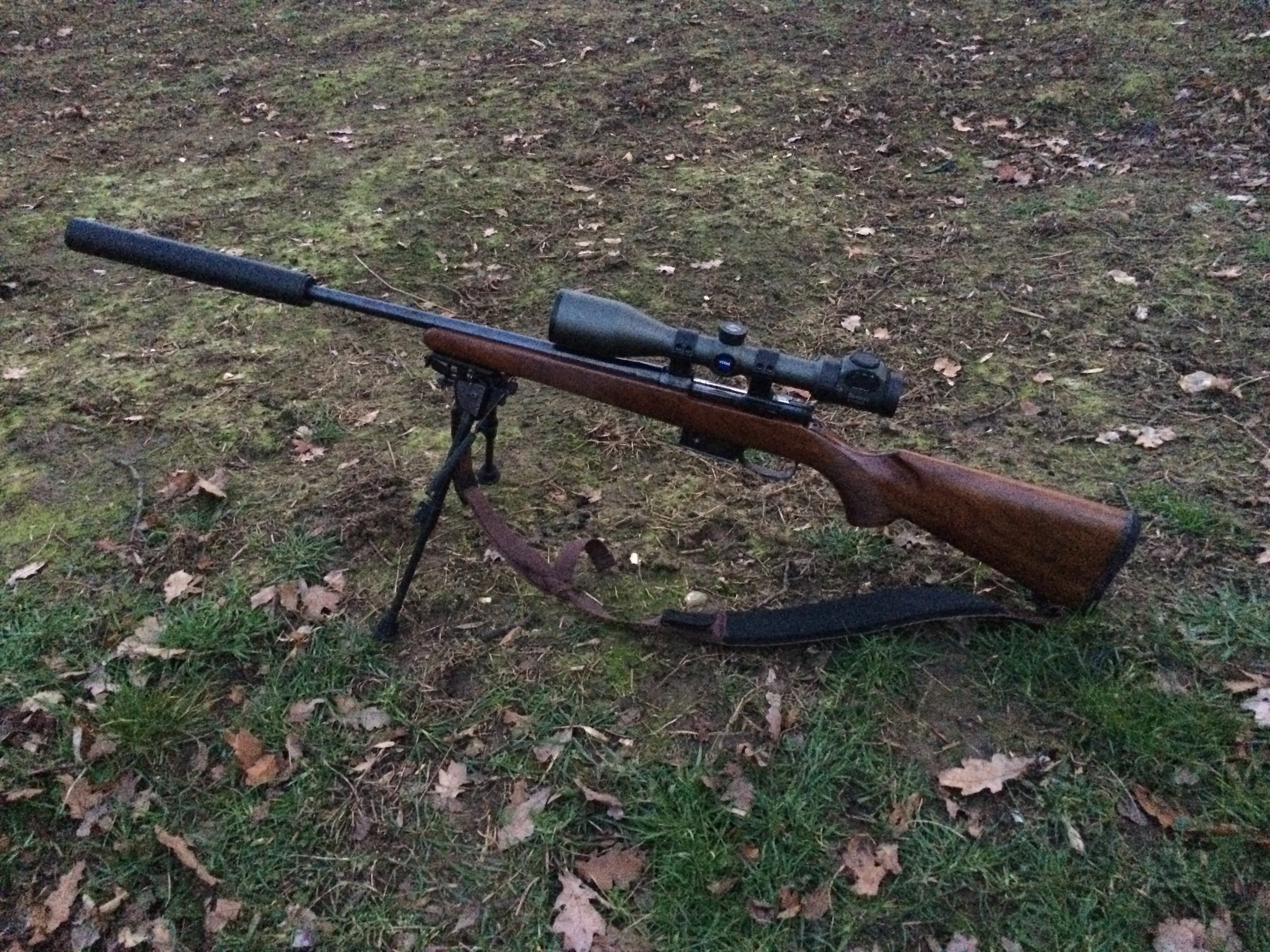 And here's a Chinese Water Deer I took with it 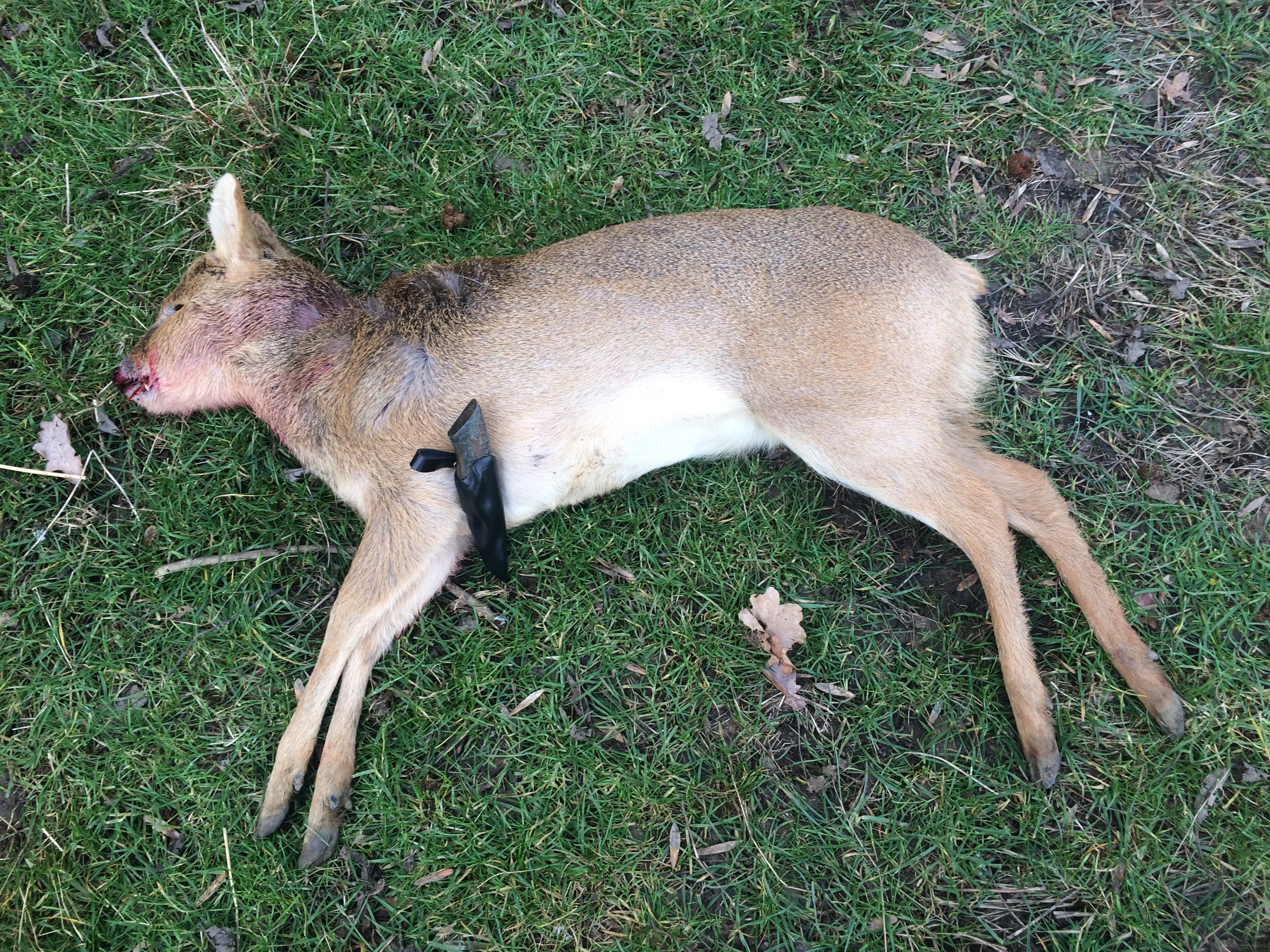 Also legal for roe deer in Finland.
I suppose the main thing is that you have a bullet that works at your velocities. You don't want a bullet that just zips through, nor one that shatters on contact.

perttime said:
Also legal for roe deer in Finland.
I suppose the main thing is that you have a bullet that works at your velocities. You don't want a bullet that just zips through, nor one that shatters on contact.
Click to expand...

As consumers, it seems like we are asking a lot of our bullets noadays.
Remember when you could just go out and kill stuff without worrying about hide damage?
“They that can give up essential liberty to obtain a little temporary safety deserve neither liberty nor safety.” Benjamin Franklin 1759

.223 and .22-250 are very common in Australia and take various game and pests opportunistically. Shooters/Farmers taking pigs, goats foxes, wild dogs and the occasional deer with good shot placement.
I do believe in premium projectiles but I’m not familiar with the ones you mention.
1 they may need a faster twist to stabilise
2 Something like a Barnes maybe a happy medium slightly lighter with a tough construction .
3 good old soft points work although I do use a like Nosler BT’s
Chris “Australia"
Dreaming of Africa, Hunted Africa, 2020
The website made me do it! 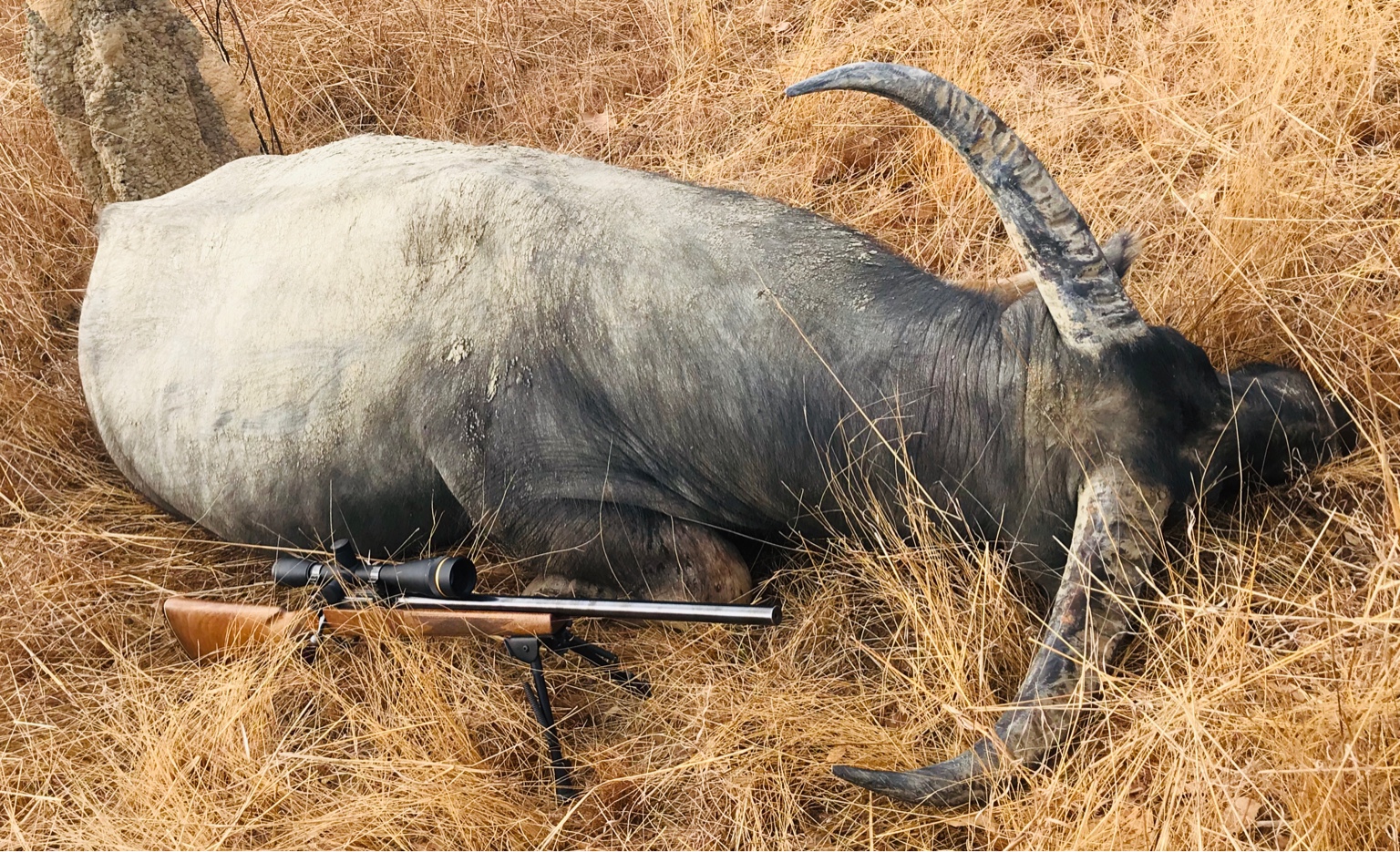 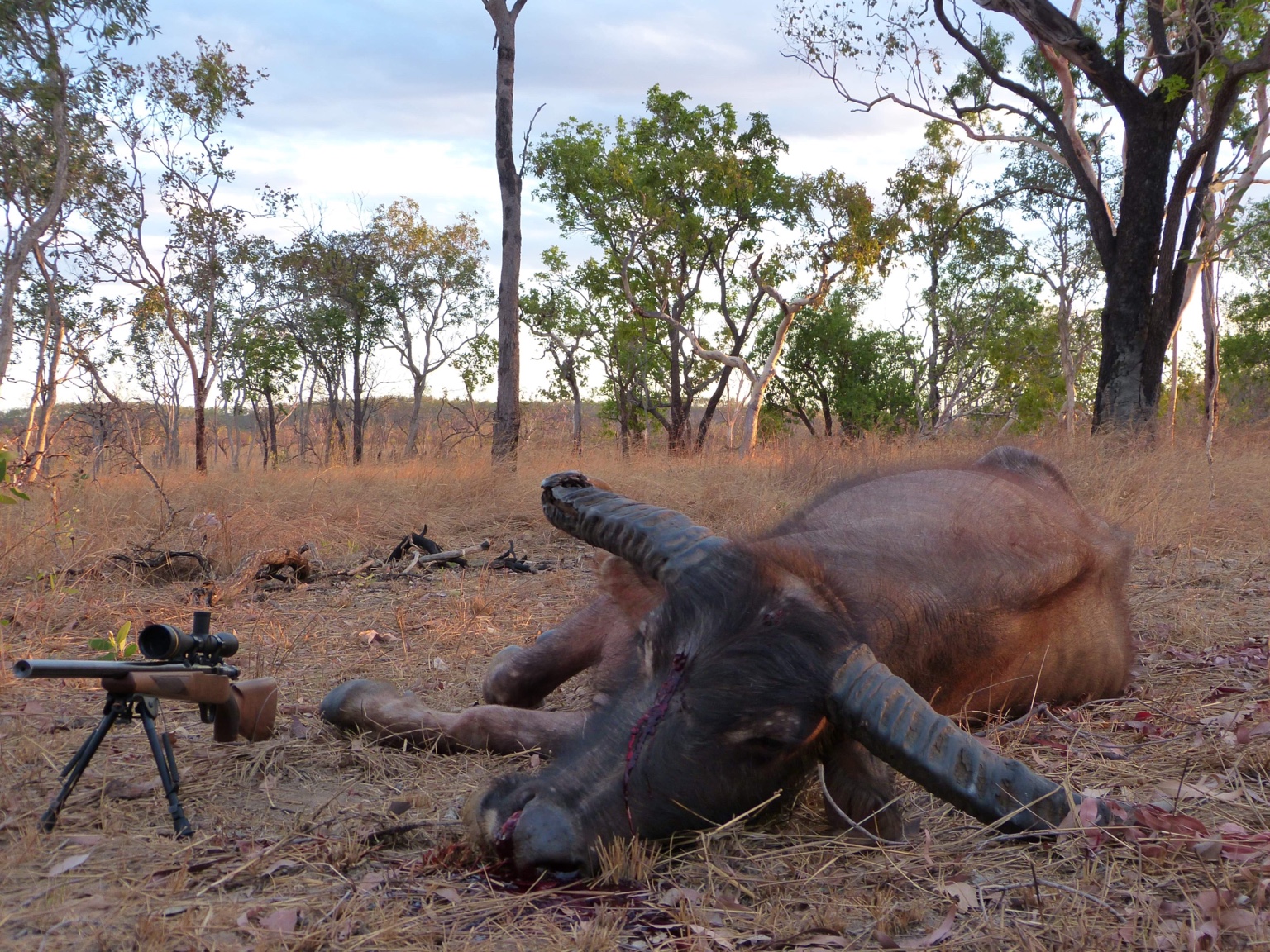 Well there you have it! @BenKK (Another Aussie) has downed those beasts with a .22 calibre of sorts and Bloody Good shot placement.
I hope his mate has a stopping rifle to back him up but Barnes and Nosler there you go.
On the little African critters you mentioned (soft skin) I’m sure most projectiles would work so long as they are not a dedicated varmint projectile that will break up on a tougher animal or tear up a small animal.
Chris “Australia"
Dreaming of Africa, Hunted Africa, 2020
The website made me do it!
S

perttime said:
Also legal for roe deer in Finland.
I suppose the main thing is that you have a bullet that works at your velocities. You don't want a bullet that just zips through, nor one that shatters on contact.
Click to expand...

Funnily enough 22 centre fires are legal in Scotland for roe but not in England. Daft laws...
M

If that’s the .224 Valkyrie you mean when when you say 224v then it doesn’t seem to have any advantage if it will disadvantage the accuracy.
I’ve heard of it, just googled it.
I reload but im not an expert. If you can’t get suitable accuracy with heavy projectiles then it’s useless. Well I suppose 3moa May get you a Deer if restricted on bore diameter but seems like .22-250, .220swift or .22-250ai might be better. Even if you can stabilise the 62gn Barnes in those you might be better off. I’m sure there are others that can suggest something as there are other projectiles out there.
Sounds like the .224v is trying to encroach on .243win territory with a case like that. If .243 is an option there may be more projectile options. There are other 6mm chambering options if you can go there too.
Chris “Australia"
Dreaming of Africa, Hunted Africa, 2020
The website made me do it!

@BenKK
Looks like you parked one in the brain pan on the second one.
Where did you get the first one?
Was it a cull hunt?
“They that can give up essential liberty to obtain a little temporary safety deserve neither liberty nor safety.” Benjamin Franklin 1759

Several chest shots to bring the bull down, plus insurance. For meat.