I met Dr. Daniel Stahler on a dirt road overlooking the town of Gardiner, Montana, situated right smack on the 45th parallel. Dr. Stahler, a veteran wildlife biologist who first came to the park in 1997 to participate in its wolf program, was about to make a trek into what he calls a “cluster site” in the developing heat of an early July morning.

Dr. Stahler was gracious enough to let me tag along on what would be the last such journey of the season. We hiked just about 500 yards before we had a full view of the Gardiner Basin, one of the premier wintering areas for many of the park’s ungulates. Here, the Yellowstone River acts as a common migratory funnel for the famed Northern Elk Herd, along with moose, deer, and bison.

“It’s really like a step back in time,” he said. “I call it the American Serengeti, a vignette that provides a look at the American West of yesterday.”

The heart of this country is home to M220, a young male cougar who has had quite the summer. He was collared last winter a little over 20 miles south of the Gardiner Basin, w the core of his winter range. He weighed in at about 140 pounds and was estimated to be 4 years old.

Dr. Stahler and other park biologists have been tracking M220’s predation habits since May 3, which gives them a current data set of about two months.

During that period he battled some older, more dominant males to slip in and establish a territory range of about 40 square miles down into the Black Canyon of the Yellowstone River. While avoiding rivals he also made 17 kills: two mule deer (one fawn and one old doe), and 15 elk (four cows, two yearling bulls, six neonates, and one unknown).

That’s almost double what’s common for lions like M220. Dr. Stahler says that most big cats average a kill every seven to 10 days, which means this young tom would have been expected to kill six to eight ungulates over the two summer months.

So, why is he so prey happy?

That’s what Dr. Stahler was looking to nail down.

“Ultimately the objective of this work is to study predation patterns, food habits, and the kill rate of the cougar,” he said. “How often are they killing? What are they feeding on? That leads into a long-term monitoring program that helps biologists understand the role that cougars play in this legendary ecosystem.”

The cluster that we were hiking toward featured about 10 GPS points logged by M220’s collar. Over 60 days it marked almost 200 such cluster sites that the research team identified and searched. The collar fixes a geographic location every hour around the clock and uploads the data with about 12 hours of lag time. That data runs through a model which identifies clusters of more than two points within 200 meters of each other within six days, likely where the lion has killed something.

As we approached the site, Dr. Stahler noticed a bedding area under thick juniper cover and the remains of a month-old elk calf, M220’s 18th kill of the summer. He didn’t leave much other than the lower jaw, a front leg, and the skull cap. The lion crunched up bone and ate the nutrient-rich brain, flesh, and organs. 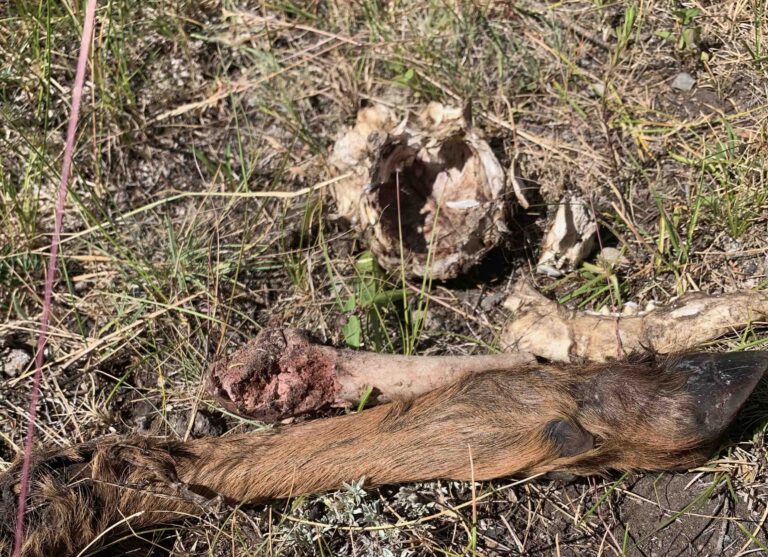 “A cougar that kills an elk calf typically leaves just about this much behind,” Dr. Stahler said. “They consume the bones and hide, no problem.”

M220’s last kill was a yearling bull elk only days before this calf. Data points suggested that he was at that site for just 15 hours. Black bear scat tells Stahler that M220 killed the bull and then was displaced by a bear.

So, he traveled a few miles away and killed the calf.

This paints a picture of how predation rates might vary with these big cats, and why M220 may seem prey-happy if you only look at the numbers.

Stahler’s short answer: It depends on what M220 was eating and whether he was able to finish his meal. A small prey package like the 30 or 40 pounds of meat on an elk calf would keep him satiated for less time than a full-grown cow.

“When a cougar makes a kill, they tend to cache it and stay on it for a few days before they’ve eaten the entire carcass,” Dr. Stahler said. “An adult cow elk might take them four to five days to devour, it might be half that for a calf.”

Once in a while, particularly with males, cougars can be a little more exploratory during a kill event. M220, for example, killed an adult cow elk a few weeks ago and Dr. Stahler tracked him to a bedding area a mile and a half away from his meal. Cougars are all about concealment and they have a lot of competition on the landscape, so it makes sense that M220’s M.O. is to get somewhere safe away from the kill site and come back only to feed.

The evidence shows that bears were likely displacing him from 50% of his kills, which turns out to be the big difference for M220.

CSI Yellowstone, as Dr. Stahler calls it, is about piecing the story together from the physical evidence and data trends. Biologists have been working like this for over six decades to learn the behavior of predators on this landscape. The tactics are generations old, but Stahler gets the advantage of new-age technology like GPS collars.

Though there are many opinions about the impact of large carnivores in an ecosystem, scientists like Dr. Stahler cherish the real knowledge they’re gaining that allows them to critically evaluate the data. His job is to study predators like cougars and wolves to make sure we know how to achieve a sustainable balance.

“We have this rich evolutionary history with these animals. Our ancestors competed with them for space and food. They killed us. We killed them,” he said. “It still happens today. They represent this stubborn, nagging conflict, and they can be very difficult to live with, there’s no doubt about it. If we look at the history of carnivores in the last few hundred years, it’s really shifted from complete persecution to a better understanding.”

Thanks to M220 and other cougars like him, Yellowstone has become the place to go if you want to understand the finer details of predator and prey interactions.

Interesting read and thanks for posting.

CAustin said:
Interesting read and thanks for posting.
Click to expand...

You're welcome I found it very informative.

Doesn't look like he is a wanton killer. More like he was driven off his kill by larger predators frequently and had to hunt again to feed himself.

Maybe he just likes to hunt lol definitely a good read!!!
You must log in or register to reply here.

In Africa, Geneticists Are Hunting Poachers