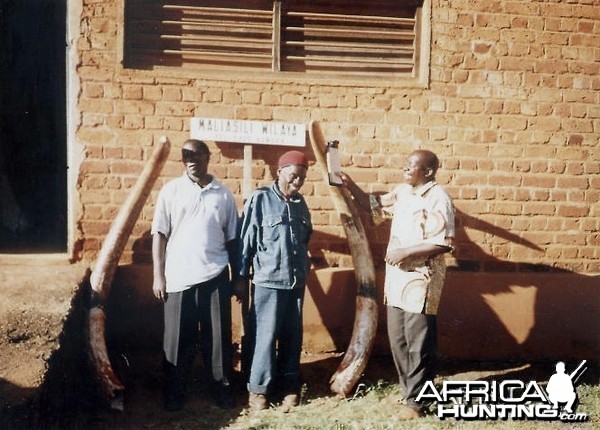 In 2005, It took four shots from a worn out Governmental issue .458 to put down Tanzania's first hundredpounder elephant after nearly two decades. The last two shad been shot by tourist hunters in 1983 and 1986 in the Selous Game Reserve. The grotesque drama took place in Mbinga District, the most south-western corner of Tanzania, which borders Mozambique and Lake Malawi.

Elephants have given way here to cultivation long time ago and those who stayed were poached out in the eighties. Therefore crowds of people gathered and watched the spectacle when a huge elephant appeared one morning in Ruhehe village. Youths threw stones, and later in the day 19 year old Lazaro Ndunguru climbed a small tree close to the animal. According to the official report by the Wildlife office in Mbinga he clubbed the tusker on the head with a knobbed stick. Being so unpleasantly disturbed, the elephant bull grabbed the unfortunate young fellow with the trunk, smashed him against the tree and stepped on him. Death had been immediate according to a medical doctor.

The elephant left and destroyed in the following days several hectars of crops. On May 8th two game scouts who had been dispatched by Mbinga District authorities shot the bull at 2 pm in Uzena village. The District Game Officer, P.H. Ndimbo said that the tusks weighed 47 kg (103.61 pounds) and 48 kg (105.82 pounds) respectively, had a length of 225 cm (88.58 inches) and a circumference of 50 cm (19.68 inches) at the bottom.
Last edited by a moderator: Dec 1, 2016
Gerhard R Damm
AFRICAN INDABA - Dedicated to the People & Wildlife of Africa
You must log in or register to reply here.

An Elephant Hunt in Tanzania

Elephant conservationist in Tanzania gunned down by suspected ivory poachers