Has someone read this book?
I add the review 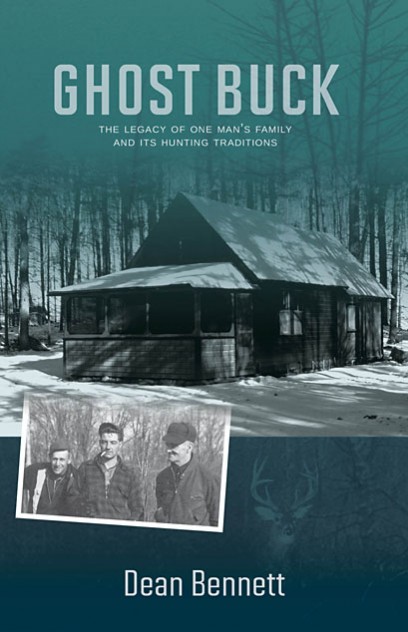 I’ve been eagerly anticipating Dean Bennett’s book of hunting stories, ever since he told me last year he was writing it. But
Ghost Buck, published by Islandport Press, turned out to be even better than I expected, the series of great hunting stories interwoven with a history of the western Maine towns of Greenbush and Locke Mills and Dean’s family who lived there for generations. The hunting stories all came from the family’s camp in Greenbush, just a few miles from the house where Dean was born.

I love how Dean, an author of many other great books including one of my favorites, Allagash, Maine’s Wild and Scenic River, explains his purpose in writing Ghost Buck: “I wrote this book so that my readers would understand how hunting today has evolved from – and is part of – the culture of many rural communities, and how it has become part of one family’s traditions, helping shape the attitudes and behavior of each successive generation.

“Deer hunting, like so many other activities families can do together, is an important way my family creates and passes on from generation to generation a kind of family lore. By lore I mean the traditions, anecdotes, practical knowledge, beliefs, attitudes, values, and legends that are a part of our family’s history, and help to shape our behavior. Through the years, deer hunting has brought together all of the members of my family at different times, in myriad of ways, stirring our imagination, creating excitement and joy, and lifting our spirits.”

As a young man, Dean’s grandfather earned $200 a year cutting wood, haying and caring for cattle, building stone walls, and growing and harvesting crops. “This was in keeping with the times,” writes Dean, “an era when the average life expectancy was forty-seven years; when most births took place in the home; when only 8 percent of the homes in the country had telephones, when cars were an extreme rarity; when only 20 percent of adults in the United States could read and write; and when only 6 percent of Americans graduated from high school.” Yes, some things are better these days.

I especially enjoyed Dean’s stories about his son Rick, who I know. Rick made his first visit to camp when he was two months old, and he still returns every fall to hunt with his Dad. Rick’s sister Cheryl also hunts. They are all very lucky.

Dean writes about a period when far too many hunters were accidentally shot and killed. His area of the state was actually used as a test area for fluorescent orange, enjoying a 68 percent reduction in accidental shootings, and leading to the adoption of fluorescent orange as a statewide requirement.

Dean used his family’s camp register, photos, and letters from the 1880s to today, to write this wonderful book that is sure to trigger your own memories, whether or not you have your own family camp. Dean’s stories brought back many memories for me. When he was a kid, his grandfather taught him to trap muskrats. My Dad taught me to trap rats when I was in high school.

“I reach into my pocket to take out my watch. There’s still some time left before we’re due to meet up at the Old Cellar. I look at the watch again. It was my grandfather’s. My grandmother gave it to me after he died, and I’ve carried it with me every hunting trip since then.”

My Dad – who hunted with me for 53 years – died the day before the 2014 firearms season on deer kicked off, and I’ve worn a piece of his clothing on all my hunts since then. So in a way, my Dad, and Dean’s grandfather, are hunting with us still.

Dean’s story of sitting in a tree stand could have been my story from this past November. “Sitting in a tree stand promotes thinking, and at this moment I’m thinking about how many years I’ve been hunting in this spot, ever since I could carry a gun and hunt by myself. It was sixty-six years ago, in 1949, when I was first allowed to join my family’s annual hunting party as an official member. It had seemed like it would never happen. Growing up takes longer when you’re trying to reach an age where you’re allowed to do something you’ve always wanted to do. It seems like it happened just this morning.”

I especially enjoyed Dean’s stories about the old days. “The Grand Trunk, through its extensive advertising network, would tout big-game hunting along its routes in an effort to lure hunters. Nonresident hunters would book into the Mount Abram Hotel. During the season, people would gather around the wagons carrying deer into town and comment on sizes and racks, listening with rapt attention to stories of the kills. People would stop by homes to see deer hung up, offer congratulations, and hear the tales that were told. It was in this environment that my grandfather, his children, and his grandchildren grew up, and many could hardly wait until they were old enough to carry a gun and hunt.” Ah, the good old days.

Dean made a map that shows where, on their hunting land, each and every deer was shot, going back generations. The map stays at camp and “gives a reality to events that we tell over and over with humor, surprise, and suspense – stories that carry each of us back into the past, releasing our imagination, and letting us relive them, stories that we know could happen to each of us on our next trip over the mountain or into the swamp, or wherever we might go after stepping out the camp door. Such is mapping memory.” I have a map just like that!

And oh yea, what’s the ghost buck all about? Well, the ghost buck is often heard, but rarely seen, and never killed. Even when Dean shot a monster 250 pound nine-pointer, he knew it was not the massive ghost buck.

I haven’t told you much about Dean’s wonderful hunting stories. They are here, for sure. But I want you to know that you don’t have to be a hunter to enjoy this book. It’s a real treasure.

Thanks for posting. It sounds like a really good book! I love Maine.
Regards,
Philip

Thanks for sharing.
Witold
You must log in or register to reply here.

New Book - Following Footsteps; Thank you Dad for Making Me a Hunter

B
A few quick "Book Reports"