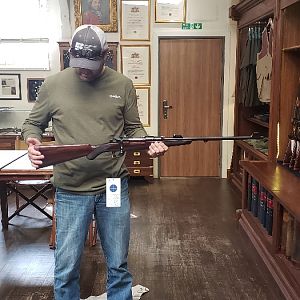 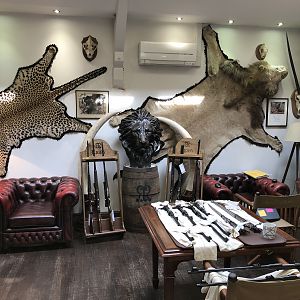 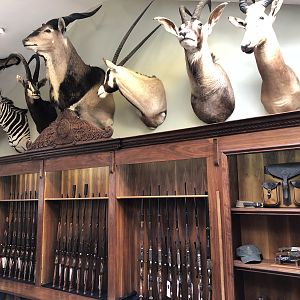 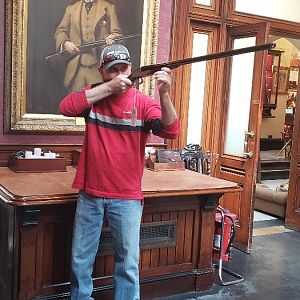 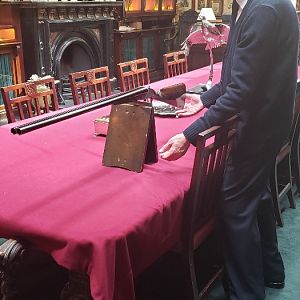 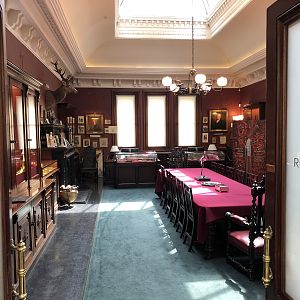 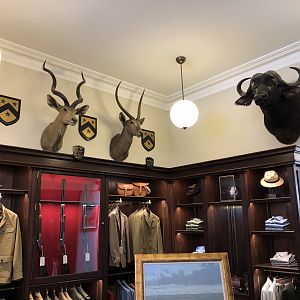 We then headed down the street to Purdey. It was exactly what I had envisioned a London gun store to be! The company was started in 1814 and moved into this location in the 1870s (I forgot the exact date they told us). It is a multi-room store with guns, hunting gear, and old historic mounts in every room. Mounts from Tanganyika and Kenya from the early 1900s above the gun racks. Then we saw a huge room with guns along the walls and a desk at the back. I wasn’t sure it was for the public but then we met David Emanuel. This wonderful gentleman invited us in and gave us a great tour and history lesson on the company, the guns, the building and Purdey in general. The room we were in had been Mr. Purdey’s office and the large table down the center had once been an opening into the workshop located below so he could walk around and watch the work being done from his office. The huge ledgers locked in the cabinets below the guns documented every gun ever made by serial number, who it was made for, and specific details about its custom work for that owner. Of course the names there are a study of royalty and who’s who in British history.
David then said “so, you are a shooter. Would you like to see a new Purdey gun?” I said sure and he unlocked a cabinet and handed me a custom 12ga double that was No 2 of a set. I was half afraid to touch it and he kept saying, feel the action, how it breaks, how it points. As I handled this gun I noticed the tag and realized this gun I was handling like my old duck gun was worth considerably more than my home. (378,000£ for the set).
My wife and I visited with David for over an hour. He even had her interested in the history of gun making in London. It was a great experience and one I would encourage anyone visiting London not to miss.
Click to expand...
There are no comments to display.